Formation: Howard and Cockrell attended the same school.
They regularly met after school to write songs together.
Johnson was working at a local record store, and the two went to meet him.
Fogg joined the band after hearing their demo.

Music Career: In 2011, they released the 4-song EP, 'Alabama Shakes'.
They signed to Rough Trade Records in the UK, and ATO Records in the US in November 2011.
Their album 'Boys & Girls' was released in April 2012.
It was awarded gold record status by the RIAA.
In 2012, they performed at Bestival, alongside the xx, and Stevie Wonder.

Alabama Shakes have topped US charts - here's how they did it.

It looks like the new chart system is benefiting a lot of people, most recently US rockers Alabama Shakes who have managed to secure the top spot with their incredible second album release 'Sound & Color'. But just how has this modest quartet spiralled to success so easily?

Since their official formation in 2009, the Alabama group have impressed all who hear them. They're lovable not just for their unique and captivating roots rock sound, but also for their humble appearance; doing away with the ethos that music should be combined with image and instead opting to be just, well, themselves. So just how have this unlikely collective won over the rest of their nation so easily?

The Alabama outfit (as you'd guess by their name) are celebrating their first Number One record this week after 'Sound & Color' beat all other records.

Rock group Alabama Shakes scored their first Number One album in America with their second effort Sound & Color, according to Nielsen SoundScan.

In quite a low-selling week, the rockers sold 96,000 copies of their sophomore effort to reach the top spot in the Billboard 200 chart. The reformed system counts track equivalent sales and streaming equivalent sales, though some 91,000 of Sound & Color’s sales total came from traditional physical sales.

Alabama Shakes’ debut album Boys & Girls won the group a lot of plaudits upon its release in 2012 for its classic rock sound. It peaked at Number 6 in the American charts, nearly a year after its release, due to its three Grammy nominations in 2013.

Continue reading: Alabama Shakes Rock To The Top Of The Billboard Albums Chart

Alabama Shakes' use of Blues Rock and Soul has taken the four-piece band from Athens, Alabama, to great heights in a relatively short period of time. Their sophomore effort 'Sound & Color' is a similar cocktail of Kings Of Leon licks, The Black Keys infused Blues, and classic Soul power, but there are a few extra ingredients to add a little more spice tucked away here. This certainly isn't 'Boys & Girls' MKII, indeed there's less reliance on those catchy guitar hooks this time around. While Brittany Howard's occasionally astonishing vocals are the main attraction again, there's undoubtedly a real musical progression that's been made by the rest of the band. The result is that Alabama Shakes feel far less like a Soul band trying to pass themselves off as an Indie band; they're now quite comfortable in their own skin.

Straight out of the gate, the title track has an almost hypnotic effect with its slightly syncopated drum rhythm, strings, and repeated "Sound & Color" mantra. It's not the only time where the familiar incessant guitar hooks of the previous album are entirely absent. On first listen, it's almost slightly jarring with your expectation, but it's that drumming that really shines and that's the thing that pulls you in. The shift in focus also seems unexpected considering that Blake Mills has co-produced the record. Surely a man famed for his guitar playing would choose to highlight that aspect of Alabama Shakes successful formula? Well, no; Mills is no stranger to using instruments sparingly for dramatic effect, and it really shows here.

The next few tracks seem to head back towards a more recognisable musical template for Alabama Shakes. The energetic and confrontational 'Don't Wanna Fight' gives Howard a chance to really let rip vocally, but again, behind the funky guitar line, it's those drums that catch the ear. Perhaps the stand-out of the record 'Gimme All Your Love' is the best example of Mills' expertise in deploying instruments sparingly. The guitars dramatically punctuate a late night jazz club beat that ebbs and flows into a final impressive call and response instrumental jam that's perhaps the band's finest moment committed to tape thus far. It's perhaps fitting that the acoustic 'This Feeling' follows as a respite from the aural assault that's come beforehand.

By Holly Williams in Music / Festivals on 21 October 2014

After plenty of extensive touring already, St. Paul & The Broken Bones are set to hit the UK and Europe in Spring.

St. Paul & The Broken Bones are the latest musical knockouts to come out of Alabama with their brand of invigorating soul revival that they plan to demonstrate all across Europe in the coming months. 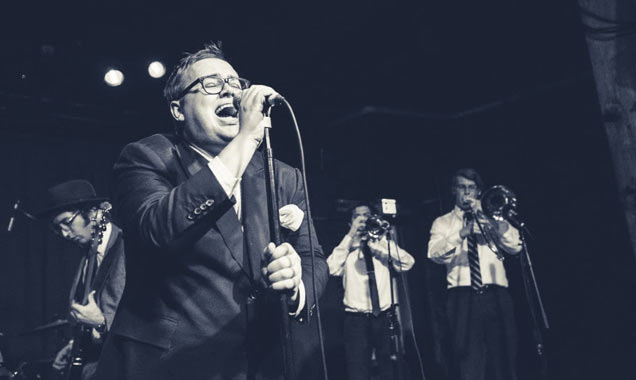 St. Paul & The Broken Bones hit the road next year

The seven-piece have announced a series of tour dates for March 2015, with dates spanning Germany, France, Spain, the UK, the Netherlands among others. It comes as no surprise as the band have barely stopping performing of late, with shows across the US and Europe having already taken up the bulk of their year as they continue to promote their debut album 'Half The City'.