For over a decade Contactmusic.com has been an essential destination for each and every fan of music and entertainment.

The website was launched in April 2000 by a team of music and entertainment enthusiasts and has expanded to over 50 staff and freelance contributors from all around the globe.

Cutting edge in every way, Contactmusic.com is committed to providing the hottest news, videos, reviews, interviews and photo imagery as well as hosting a bubbling community that caters for every entertainment crazed web user.

Contactmusic.com is a trusted and much quoted source for the latest news on many artists from Katy Perry to Kanye West or Lupita Nyong'o to The Ramones and has been name dropped by the likes of Jay Leno on the Tonight Show, BBC Radio as well as receiving mentions from the likes of Ricky Gervais and a host of other artists.

Contactmusic.com gets face to face with the greatest stars including Amy Winehouse, Stevie Wonder, Wyclef Jean, Ice Cube, Daniel Radcliffe and Scarlett Johansson but is also devoted to introducing excellent new talent as it emerges like Syd Arthur, His Clancyness, Ava Luna and Holly Williams.

Publishing a torrent of high quality and in-depth content each and every day of the year through the expertise of its writers, designers, photographers and videographers Contactmusic.com is committed to enabling it's users to keep their finger firmly on the pulse of the ever changing world of popular culture and it's sub cultures.

Contactmusic.com hosts a wealth of entertainment photography spanning back over almost ten years. Contactmusic.com's ever expanding photo galleries cover over 20,000 artists including the likes of The Rolling Stones, Jennifer Aniston, Lorde, Justin Beiber and Harrison Ford as well as all the major entertainment events such as Coachella, Glastonbury Festival, The Grammy Awards and The Oscars.

Registered Trade Marks
Contactmusic, the "C" device logo and Contactmusic.com are all registered trademarks® in USA and Europe . 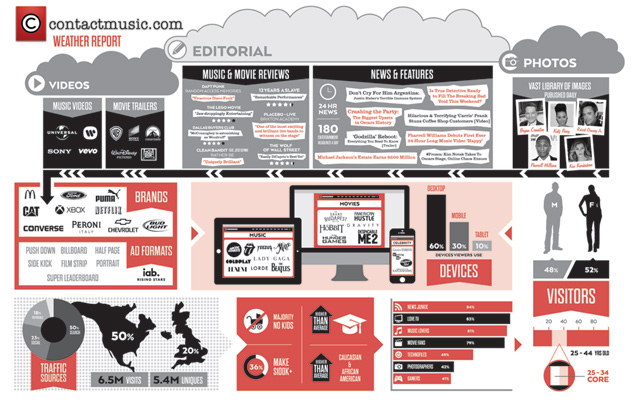