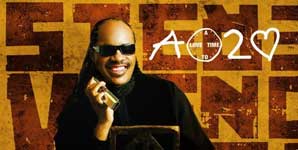 How do you measure the greatness of a man?
Do you do it in terms of success? If you do, then Stevie Wonder is a great man, he is one of America's all time top ten chart stars.

Do you do it in terms of artistic acclaim?
Then this is a great man, he has won more Grammy awards than any other solo pop musician.

The true greatness of a man of course is in the heart and the conscience and this is truly a great man, Stevie Wonder has used his heart and conscience to change the face of popular music. We judge him by his inner visions.

1. I remember Motown having T-shirts printed, saying "Stevie's almost ready" prior to the release of Songs in the key of life because it had taken one and a half years to complete. Why did this album take ten years?

Greets the press & says it's good to be back in the UK. I sincerely thank you (UK) for your consistent support and objective criticism. Because we have a few things in common, we definitely speak our minds and I respect that.

Firstly I'd like to thank you all for your patience. To answer the question why ten years, obviously, I wasn't working on "A Time 2 Love" for ten years I was doing life. Experiencing life, we were all doing life; we were all experiencing things that have happened in these last ten years. A lot has happened. We have experienced wars, terrorism, political changes and social changes. We have experienced a lot of different things. We have experienced some new wonderful faces and lost some wonderful faces and some wonderful people. Some have gotten married while others have got divorced, some have fallen out of love some have fallen in love. Some have had children. It's all a part of life, all the things that have happened in the last ten years.

From within all those things, that have happened, is the answer to why I have been able to come up with "A Time 2 Love" because I truly do believe that more than ever in life, at any other time, we have so many new things in things that we do. One thing we have a great need to have time for is a time for love.

I want you to know that "A Time 2 Love" yes it's a CD, an album but "A Time 2 Love" is more than that. It's a movement and I hope that we all take a part in that. Next I want to do a gospel album, then a jazz album then something for kids.

2. Two tracks on the new album feature your daughter Aisha, who was the youngest chart star in history, less than one minute old, on "isn't she lovely". I view Aisha contributions on "A Time 2 Love" as a beautiful completion. Do you?

Well, Aisha is a blessing. All my children are a blessing to me and my family extends all the way back to Syreeta. Syreeta was my first wife. She passed away two years ago from breast cancer, so it's wonderful to have Aisha singing on my latest album. It's wonderful to have all the people who collaborated on the record, Sir Paul McCartney, Kim Burrel, Prince, En Vogue, Bonny Riatt and all the other great musicians who play on the record. Obviously the title track to the album is co-written with India Arie, so it's been a lot of fun and it's been a time of great joy and sometimes some major pain too.

3. There was a time in your recording career when you did almost all of it yourself. Now you have so many fine people collaborating with you. Is this because you think the songs call for other people or this phase in your life calls for other people?

You know, I never really say "I gotta do this that way or that this way" life is ever changing, ever different, so I just do whatever feels right. I did more playing on this project than I have on recent projects through and through, but you know, there was some wonderful participation by some of the musicians on this record. I mentioned some names before but there are others I didn't mention everybody's contribution counts.

4. As one of the forefathers of RnB is there anything about modern RnB that disappoints you – are there any ethics within the music that make you frown?

I must say, I wasn't one of the founders I'm not that old! Over the years I have been one of the lovers of RnB since the very beginning. Going right back to the music that my Mother and Father used to play me when I was in my room. I used to lay on my floor listening to the radio, hearing songs like "shake, rattle and roll" and all those songs that were out back then. I just got curious, curious about "how do they do that"? How does all that stuff come through this little radio thing here. I was simply amazed by the whole deal.

To answer the question, I'm not disappointed in modern RnB. Like anything you have music which you think is great & music which you think is so, so. I treat music like art and the beauty of any art is in the eye of the beholder or in music' case the ear. What I love about music is that it is ever changing; there are new ways, unique ways of doing things. Some say that the rapper is like the new blues singer talking out all the hardship in their lives, telling you about what it's like to live where they live and what their life entails. I think as long as the rapper is sincere and real about the story they tell, then it comes across as real and that's great. I'm not disappointed, I am always curious as to what is going to happen next and being a music lover as well as a songwriter I'm challenged when I hear new stuff. I like modern RnB artists like Aliyah, Beyonce, Common, Kanye West, Jay Z and all those guys.

5. We were reminded of what a compelling live performer you are when we saw the Philadelphia coverage of the Live 8 concert. The debate surrounding the financial debt Africa has with most Western countries is something you helped teach us about early on through your music. Did the occasion have a special significance for you and what feeling did you get from Live 8?

First of all it was an honor to be part of a statement such as that, so significant and so needed. I think that music is a key way to touch people's hearts and get issues noticed. I think that every single continent has, to my understanding, some natural resource to help them survive. This has been given to the earth by God so that we all can survive and exist. So when I keep seeing these things on television about how poor Africa is I think "well it is only poor because the developed nations have taken these natural resources without giving them the money back to survive. So in my opinion the debt has already been paid. I believe it's about the world being fair, through and through. When the world becomes fair – then the world will come together as one.

6. It has been reported recently that you are in negotiations to become a guinea-pig for pioneering sight surgery which may result in you being able to see. Is there any truth in this?

Well, I found out about a pioneering eye doctor in Baltimore who has pretty much invented a new type of eye surgery. What they do is they put a tiny microchip inside your eye. This can capture images and send them to your brain as electrical impulses via a nerve. The story is true in as far as I did go to see this doctor and I had some initial tests done. From that initial test it wasn't looking good for me and I haven't been back to see him since. I am aware that the news spread like wild fire but I am happy that the exposure from me having a test has put the medical advancements into the spotlight. If one blind child gets to see because of the press exposure of my visit to Baltimore then I am happy with that.


7. The incredible devastation of Hurricane Katrina shocked us all. You released the single, "Shelter in the Rain" to try and ease some of the pain that Katrina caused. I understand that you dedicated all profits from "Shelter in the Rain" to your charity organization, The Wonder Foundation, which earmarked donations for Hurricane Katrina Relief Efforts. What is the special significance of that song?


Well, at the time when I wrote "Shelter in the Rain" unfortunately by Brother was diagnosed as being terminally ill and Syreeta as well. This was one of the lowest points in my life as far as emotionally not understanding life goes. I asked God "why couldn't it be me" even though I knew that God didn't want me to question what he does. The song came to me after an intense dream in my time of grief. God gave me that song as a gift, it only seemed right to pass the gift on to those whose lives were devastated by the storm.

Stevie mentioned he is planning to take "A Time 2 Love" out on tour. He spoke of some small shows at first and then a major world tour in 2007. I will be the first in line for tickets.