Hayley Willis aka Willis releases her second album 'Uncle Treacle' on Cripple Creek Records. Hailing from West London, although she certainly sounds more American with her bluesy soul sound, received acclaim for her first album 'Come Get Some'. Influences such as Nick Cave And The Bad Seeds, Kate Bush and Bob Dylan all seem to come through in her sound. 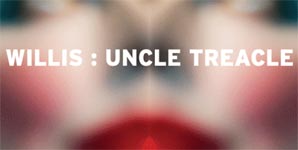 'Uncle Treacle' has many of the hallmarks of a good campfire sing along romp in the country. It has a clear folk and gypsy feel that captures the spirit of coming together at a festival. Willis does have a strong voice that you can't deny. The live band sound captured on this album is inviting and compliments the vocals. She is certainly is what sells the album and I'm sure it could appeal to many female listeners or fans of strong female vocals.

Unfortunately beyond the vocal 'Uncle Treacle' doesn't really say much, not that this is a bad album as it is quite well put together but when it comes to the lyrics and depth, there's something missing. I don't need to go back to Woodstock or jump in a caravan when there's so much other music out there that can take me to space or to the soul party, but that's just my opinion. The feel of the album is positive and uplifting at first listen and has some 'feel good' aspects although after a few listens loses much of its charm.