'I usually don't work with a lot of people, but my man Josh is in another lane.' When hip-hop heavyweight Ghostface Killah says this about you before your first album has even come out, then chances are you have something that most others do not possess. For Josh Osho, life has moved at a rapid pace since his musical talents were first recognised by Island president Darcus Beese and with the release of L.I.F.E., his debut album, things are hardly likely to slow down anytime soon. 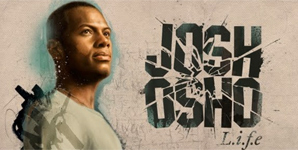 Already Osho has friends in high places, if Besse wasn't enough then Ghostface, who features on Osho's debut single 'Redemption Days', and fellow Wu Tang Clan affiliate RZA, who remixed it, count themselves as fans and colleagues. Both Wu members served as executive producers of his album and, although it is Josh's soulful voice that is one display here, the hip-hop influence from RZA and Ghostface is all too clear. RZA's samples and scratches are top notch at highlighting the real star - Josh's vocals, but it also sets him apart from some of his contemporaries (Michael Kiwanuka and even Ed Sheeran to some extent). Whilst it is essentially acoustic R&B, the production goes that one step beyond to bring in an almighty sound.

Take the lead track for example. On it Osho soulfully sings of better days (he is a boy man who has, without a doubt, experienced the darker side of life) in such a believable and emotive fashion that it instantly becomes a good song, add the grandiose orchestral backing and the help of one of the most important rappers of all time and you have a truly great song. Ghost's verse is the most impressive he's delivered on a guest spot since he worked with Beese's last discovery; Amy Winehouse. Likewise, with his follow-up single, 'Giants', enlisting the help of fellow up-and-comer Childish Gambino morphs the song from something good to something great, that hip-hop element raising the bar rather than lowering it like so many rap guest-spots do so often.

He survives on his own just nicely throughout the rest of the album, rarely missing a beat nor singing a dull note. The optimism that exudes throughout each of his songs resonates musically and lyrically and this is, by far, one of the most positive releases I've heard in a while. In a day where Osho's talents are likely to be ignored in favour of the next darling of mass-production, it comes as a breath of fresh air to know that big labels are still more than willing to put their necks out for genuine talent.

With L.I.F.E., you can bet that most people will come for the singles; if this is the case then I implore you to please stay for the feast that comes after. Josh is a talented guy and, with the backing he already has, hopefully it won't go amiss.