San Diego rockers Transfer release their debut, full length studio album Future Selves on the 19th September, with some good reviews already behind them. Their style of pop-rock with anthem-based noises sounds like it could be a promising listen, it's a confident looking album with the band's name emblazoned in huge letters across the front of it. Transfer are here, and they obviously mean business. 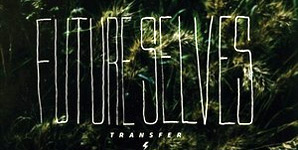 It's a promising listen, it sounds like there's influences from all walks of music, but most notably some of the more recent 'indie' bands. A lot of the music is very fast, riff-based music and punches into the listener with a 'listen to me' kind of ferocity, but there are some parts of the album that sound slightly different. One of the highlights of this is Like a Funeral, where the sound mellows down and the vocal is allowed to flower.

Vocally, Transfer put together some very uplifting and pleasant harmonies, especially on Enojado and Take Your Medicine. The lead vocals are talented but not 'in your face' and can be ignored if one is more interested in the music. Musically, Transfer make excellent use of their instruments, pushing them to their limits to get the desired sound out of them. There's subtle use of a violin on Take Your Medicine that particularly caught my ear. There's also a prevalent use of some bass overdrive that gives the music some extra punch that doesn't sound wholly unpleasant, in fact it works very well. It's very well mixed, well recorded and well produced. Every aspect of the music complements others in some way, it's very well done.

In two words, then, Future Selves could be described as 'a solid debut'. Transfer have done well to establish their style of music and stick to it throughout the album. They deviate slightly on Like a Funeral and mellow out very slightly, which was a much needed break that I was glad was there. It shows that Transfer can do more than one style of music, and do it well. Transfer pull off 'catchy' very well. It puts one in mind of White Lies, some aspects of Coldplay and even Kings of Leon.

This could be downfall of the album though. There doesn't seem to be much that's 'different' about this album other than that one song, Like a Funeral. Most aspects are easily comparable to something that's already been done, and to be an unparalleled success, Transfer need to come up with something that grabs the listener's attention a bit more successfully.

Overall though, this album introduces Transfer very well, and it's a release to be proud of. Transfer now need to experiment with their sound and bring something slightly more individual. They're a band with a lot of raw talent and lot of potential, I just hope they use it well.