The Big Moon - Love In The 4th Dimension Album Review

"Big" is likely one of the first words that most people learn. It isn't sophisticated, it isn't elegant and it isn't complex, but that does not mean that it isn't sometimes the perfect word to describe something truly delightful. Formerly known plainly as 'The Moon', by adopting "big" into their name, this all female four-piece from London have expertly captured in just three words the sense of fun that epitomises their debut album: 'Love in the 4th Dimension.' 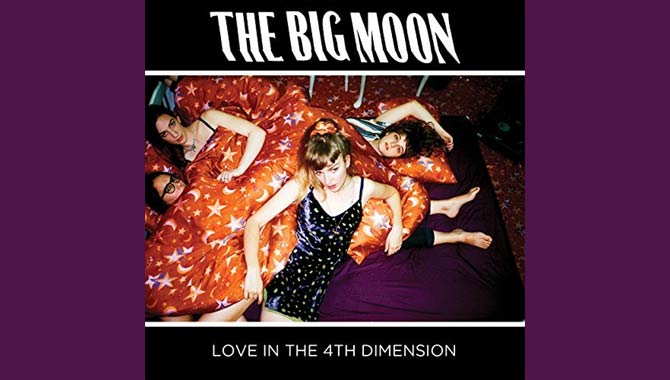 The album's opening line, taken from single "Sucker", boldly declares: 'You are in my bed/ I heard what you said', playfully establishing a fearless intimacy mixed with indecorousness found throughout the album. On guitar-heavy second track "Pull the Other One", the band exhibit some of their most gleefully harmonious work, with the seductively cheeky tones of lead vocalist Juliette Jackson complimented melodically by the work of bandmates Soph Nathann, Celia Archer and Fern Ford.

This same camaraderie is seen on "Bonfire", a track which provides the most irresistible guitar riff of the album and features excitable yelps from the band, only adding to the entertainment. This is juxtaposed with the slowest track on the record: 'The Road", providing a necessary refined respite from the otherwise electrifying chaos, also highlighting the strength of Jackson's vocals.

It is easy to compare the sound of 'the Big Moon' with that of Britpop heavyweights 'Elastica',with the band achieving the rare mix of catchy yet heavy guitars and informatively witty lyrics. No more is this apparent than on "Cupid", a track which humorously mocks the impermanence of young relationships and features the album's best line: 'See my Johnny artfully tucked out.'

Another, more whimsical comparisons have also been drawn between the band and 'The Spice Girls', though not on account of any musical similarities, rather because of the entirely female composition of each group. That is not to say that the band do not deliver their own unique brand of "Girl Power", with anthem "Formidable" defiantly repeating: 'Hi, I'm not invisible/ I'll be formidable', presenting a group unashamedly confident in their own vulnerabilities, something also visible through the inclusion of subtle nuances that acts with less personality would have undoubtedly cut in the editing room.

Ahead of a headline tour of the UK later this month and with the band already appearing on the front covers of acclaimed music magazines, it seems as though the path for success for 'The Big Moon' is written in the stars. Indeed, if their already esteemed profile continues to grow, we may be seeing another name change soon: 'The Really Really Big Moon.'