Review of Routines Album by Hoops

There's a good tradition of naming your band after something curious: Francois and the Atlas Mountains (epic geography), Belle and Sebastian (cute children's story) and Arab Strap (ask your dad). Hoops assumed their moniker as an homage to the humble polytunnel. I sh*t you not. I guess it's not that unusual to adopt a horticultural theme in music, if you consider hip-hoppers Greenhouse, comedy thrash-metallers Lawnmower Deth and gurning 70s-prog merchants, Capability Brown. You're never too far from gardening implements in song titles, either, like Motorhead's "The Ace of Spades" or "Stupid Hoe" by Nicki Minaj. 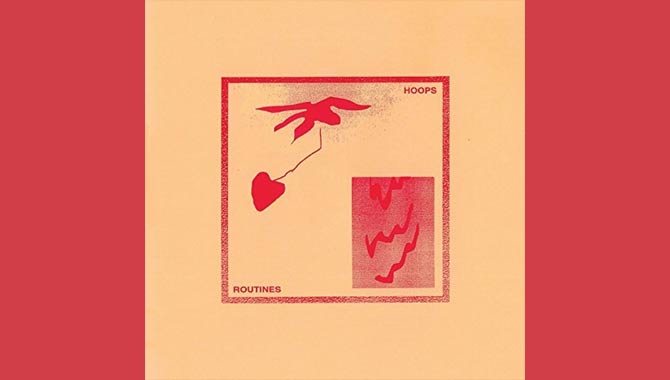 Hoops' 2017 debut album, "Routines" is big on atmosphere and texture. Reflecting the variety in theirthree-man songwriting team, it roams between styles, predominantly power pop, shoegaze and C86, with resonant Smiths guitars. It sounds like the summer of 1989, filtered hazily through the lenses of youth, beer and mild sunstroke. Imagine The Beloved, Prefab Sprout, Orange Juice and Johnny Marr jamming in a Campervan, slightly fuzzy-headed from late-night frolicking and Haribo withdrawal.

The near-instrumental "Sun's Out" begins the album with a single synth chord, a catchy drum machine, a pleasingly reverberant guitar twang and the bass bounce that underpins the albums' best tracks (like "Rules" and "Management"). The minimal, breathy, vocals whisper blissed nonchalance, a feeling which sustains throughout the album, even when the lyrics are self-effacing and melancholy, like the feeling of being an inconvenience on "Burden", or reluctant acceptance of lost love that suffuses "On Letting Go".

The band's playful versatility is an asset and something to exploit further in the future. The intro to "Underwater Theme" sounds like it's heading for a soulful George Benson croon, but the track turns quickly into moody Miami Vice incidental music, with 'You don't know what to do;/ You're running away from you.' "Rules" (Boo Radleys meets Beautiful South) plays with the expectations of an upbeat, toe-tapper, stopping dead after two minutes, just as it seems to be getting going. "The Way Luv Is" works well, yet sounds like Lloyd Cole complaining over a poor phoneline. Album closer, "Worry", has the funky trappings of a Level 42 bassline and an 80s sax solo worthy of a Billy Ocean belter.

Front-loaded with its best tracks, the songs can feel short on impact by the end, but "Routines" could easily provide the soothing soundtrack to a road trip to the coast, or thrum comfortably from a boom box at a beach barbie.