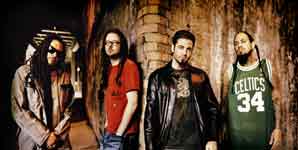 Multi-platinum, Grammy-winning rock band KOЯN- JONATHAN DAVIS, JAMES "MUNKY" SHAFFER, FIELDY and DAVID SILVERI- are set to unleash their new album SEE YOU ON THE OTHER SIDE on 5 December through Virgin Records. This will be preceded by the single "Twisted Transistor" on 21 November.

Produced by JONATHAN DAVIS along with The Matrix and Atticus Ross, SEE YOU ON THE OTHER SIDE is the most revolutionary KOЯN album since their debut…a barb-wired, bastard son of blinding musical fury, dark and twisted lyrical candor, and searing, sociopathic tendencies. It's the culmination of everything KOЯN have come to represent musically, morphed with an industrial-strength alter ego that's been suppressed—until now. SEE YOU ON THE OTHER SIDE is more than the evolution of KOЯN, it's an evolution of heavy.

In its first two weeks at US radio, "Twisted Transistor"- SEE YOU ON THE OTHER SIDE's first single- was the #1 most added track at Alternative Rock Radio. This week, the song, which radiates a hybrid funk and medicating, metallic shimmer was the most added at Active Rock Radio.

KOЯN have redefined the parameters of heavy music, revolutionizing the genre by matching unsettling guitar textures and volcanic rhythms with jagged, introspective lyrics and intense vocal stylings. The band are one of the most popular hard rock acts in the world today with a dedicated fan base and widely acclaimed live performances. They have sold a total of 25 million albums worldwide to date, 14 million of which were in the U.S. Their last four albums debuted in the top three of the Billboard Top 200, two of which entered the charts at number one.

KOЯN were recently awarded the "Best International Act" award at the 2005 "A1 Music Awards Show." KOЯN performed two songs ("Blind" and "Y'All Want A Single") on the show, which aired on the Russian alternative music TV channel.

The band will be in the UK for promotion late October. "Twisted Transistor" will be released on 21 November, with the album "See You On The Other Side" following on 5 December.