Ahead of the release of their concept album - 'The Meadow', Bay Bryan talks about their inspirations and influences

Colorado raised, Glasgow educated and Manchester based Bay Bryan is nothing if not a multi-talented, multi-faceted artist performing as both themselves and their somewhat more flamboyant alter ego, drag queen - Queen Bayard. Both are in the entertainment industry, both have performed on the same stage and both have released singles. Queen Bayard's last first single - 'I Wanna Know You', was released in January last year but since then it is alt-folk artist Bay who has taken more of the limelight. Bay's debut release - 'Sticky Shadows' was released in July of 2021 and was followed up in September by - 'Let Go'. In April this year Bryan released 'Sweet Joan', a tale about - "Evelyn, a sorceress, who risks her life to save her mortal lover Joan from a mysterious and magical illness…" Upon it's release Bryan took to Instagram to announce that - "Sweet Joan” is finally out and I’m feeling the drama of it all… actually I’m feeling more like this second picture: dorky, excited and having a GREAT time!" Bryan's latest release is lifted from their upcoming debut concept album - 'The Meadow' which is set for release in 2023. Taking time out from their busy schedule we caught up with Bay to find out a little more. 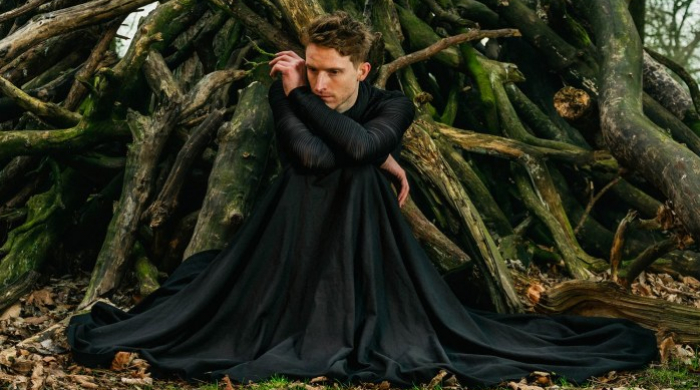 I would say that this current sound world I’m living in is alternative folk —I’ve stuck to mostly live acoustic instruments with the exception of an occasional moog or other synth sound (all very subtle and hiding in the mixes). A few artists I’ve been compared to lately include: Sam Lee, The Magic Lantern, Donovan and Cosmo Sheldrake.

hm, that’s a great question. I would actually say, one of the biggest challenges for me thus far has been the decision to enter into this industry seriously —and that was more about me pushing through my self-doubt and learning to accept that it’s something I really want to be a part of. And funnily enough once I did that, and entered into this industry with genuine intention, the fantasy of overnight success quickly dispelled and I began to understand that it’s actually A LOT of work. And that it never ends. Which works for me because I’m a workaholic XD.

I think it’s incredibly difficult. And I feel like I’m only at the very beginning stages of my career in this industry, even though I’ve been writing songs and singing at the family piano ever since I was a very small wee queer ginger... From what I understand, making a name for yourself is about finding your audience, connecting with them and then growing from there. And for me I feel like I’m still in the process of calling-out for the remaining members of my core tribe, and it’s exciting as I hear them starting to answer back!

It’s very important to me - though one can run the risk of being too overbearing and thus kill potential moments of collaborative gold. In the past I have been incredibly rigid about sticking to the vision in my head. Which usually ended up with me not producing anything at all... And even though I had my hand in almost every aspect of this current project, I would like to think that I also gave my team the space to produce their magic without them feeling too micro-managed... I do think going forward, I would like to bring in other creatives earlier on so that I don’t already have such a specific idea in my head.

It’s very difficult to pinpoint in what way I take influence or inspiration so I will just name things and people that pop up in my mind: Lauryn Hill, Maureen O’Hara, Nick Drake, Matilda (the film), Meg (in Disney’s Hercules), the natural world; a random interaction that has deeply affected me. I’m sure the list goes on and on...

There are two: Anaïs Mitchell because I love her songwriting and her ability to tell stories —and I really admire that one of her concept albums has now become a Broadway musical. With my background in theatre, this is something I would love to work more in, as both a creative and a performer... And then there’s Laura Marling. Her voice, her vibe, her songwriting, her taste and style speaks to a very specific place in my soul. I would love to sit down and either just sing with her, have a conversation, and/or maybe write a song.

Before going to bed I have to lock the door three times. It’s not the only thing I have to do but I’ll leave it at that XD. My husband and my friends accept my quirks, it’s fine.

This time next year I would love to be performing more regularly, travelling and connecting with people in a live setting. As much as I love people enjoying my music at home or from their spy devices (half kidding), I would like to connect with them in real life too.

I’ll be shouting out about Sweet Joan. Working hard to book live gigs. Playing music with friends. Singing up a storm. And I may even release another song! I’ll probably be sneezing too (if you go to my Instagram, you’ll understand what I’m talking about).