On the same day that Glastonbury welcomed back Margate's adopted sons, The Libertines, Margate itself put on it's very own Leisure Festival as it played host to numerous artists over two stages at Dreamland. In the re-imagined heritage theme park, bathed in the glow of the afternoon and evening sunshine, both The Hall By The Sea and The Scenic Stage saw a handful of acts wow the ever growing, enthusiastic and well versed crowd just a stones throw from the golden sandy beach. 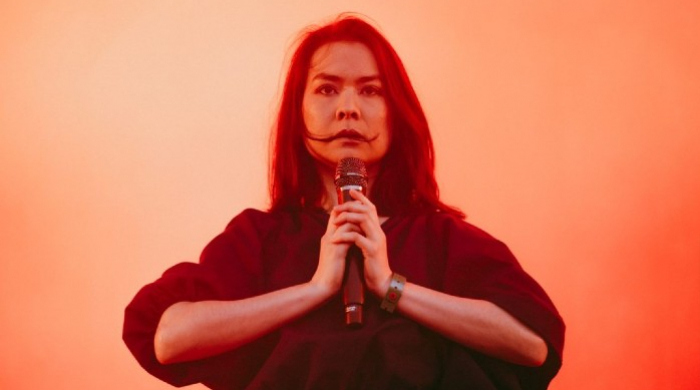 Mitski, fresh from supporting Harry Styles on his UK tour and just ahead of her own Glastonbury performance, was the super star headline act that many fans had come to see but there were plenty of other artists that more than played their part in entertaining the fans. Ahead of Mitski's stunning performance on The Scenic Stage later in the day six other bands, one solo artist and one sizable choir took to the two stages to provide an eclectic line-up of fantastic talent.

The Social Singing Choir were the first act on to The Scenic Stage. In front of the growing audience, beneath the arches of the Scenic Railway roller coaster and beside the Big Wheel, Margate's very own Choir opened up the festival in vibrant Technicolor style as they sang a range of pop covers, including a fantastic version of Robyn's 'Dancing On My Own', to the delight of the partisan crowd.

After the very entertaining home town troupe had made their way off the stage, and whilst technical difficulties were being ironed out over in The Hall By The Sea, it was the turn of the smooth and soulful Léa Sen to impart her subtle blend of electro-infused tunes to the chilled out hipsters sprawled out in front of her on the Dreamland lawn. Léa, who has recently toured with fellow festival act Nilüfer Yanya, captivated the sun soaked with 'I Like Dis' and 'better' before signing off by saying, "this has been great, I've never played to a festival this big before".

Following Léa Sen in to the open air arena was the impressive, and quite remarkable L'Rain. L'Rain's freeform set blended the experimental and avant-garde with pop and jazz sensibilities seamlessly. Lead singer Taja Cheek remained seated for the greater part of their performance but with good reason. After taking an opportunity at the very beginning of her set to ask the crowd to "indulge me" by taking a breathe and appreciate that "we're only going to be in this moment once", Cheek then explained at the end of her energised performance that "she would be standing", but that she had "broken her foot, her heal and her spine". "I so, so wanted to be here she said" to the appreciative Kent audience gathered before her.

Over in The Hall By The Sea, Melbourne’s very own HighSchool kicked things off with a very impressive and tight set that showcased the young band brilliantly. Lead singer, guitarist and songwriter Rory Trobbiani took a leaf out of fellow Aussie Angus Young's fashion book as he took to the stage in a pair of grey school uniform shorts and formal shoes. Complimenting his wardrobe with a chequered jumper, shirt, tie and full length socks, Rory drew your eye with his distinctive look. HighSchool were far from style over substance though. The antipodean band enthralled those that had decided to swap the glorious sunshine for the oppressive heat of the indoor event area as they delivered a performance that at times was reminiscent of Joy Division. Closing out their set with their biggest track to date, 'New York, Paris and London', HighSchool looked like a band destined for greatness.

CMAT, Dublin's Ciara Mary-Alice Thompson, followed HighSchool onto the stage in The Hall By The Sea shortly afterwards as she delivered an entirely different kind of performance that was littered with humorous anecdotes and comical asides. Ciara was on fine form as she played to a crowd that she had not expected to be there - "I didn't think anyone would come to see me inside with this weather" she said. Thompson played old favourites like 'I Wanna Be A Cowboy, Baby!', her breakdown "fun" song, 'Another Day (kfc)', last year's first single - 'Lonely' and brand new "break-up song" - 'Rent'. CMAT, captivated the crowd with her effervescent charm and wit, commenting at one point that she had - "never seen as many bisexuals in one area".

The heat of the Hall didn't deter anyone from sticking, literally, around to see Sorry either. On the same stage as HighSchool and CMAT, the Londoner's, headed up by lead singer Asha Lorenz, whipped up the crowd with their incendiary performance. A mini mosh-pit, the only one of the day, spontaneously erupted as the enthusiastic crowd blew up as Sorry played. 'Starstruck', 'Perfect' and former single 'Cigarette Packet' were the highlights of a frenzied set.

Back outside in the blistering sunshine Surf Curse and Soccer Mommy built up the anticipation ahead of the headline act. Surf Curse lead singer and drummer Nick Rattigan did his damnedest to keep it together as he wrestled with his dual duties. After a couple of tracks he said - 'I'm gonna keep it tight from here on in", adding that "drumming was hard" during an energised, somewhat chaotic performance.

Soccer Mommy, buoyed by the release of their/her new album, 'Sometimes', earlier in the day were the penultimate act ahead of Mitski. Sophie Regina Allison and her band started with their best known track - 'circle the drain'. Allison said - "We've got a new album out today and we're gonna play a bunch of tracks from it". She wasn't kidding as she and her band followed up 'circle' with a plethora of tracks from their new album including - 'Bones', 'new demo', 'Don't Ask Me', 'Shotgun' and 'Unholy Affliction'. Soccer Mommy closed out their considered set with 2018's crowd pleaser 'Your Dog' before exiting stage left.

With the sun's heat still beating down on the Margate theme park more and more people started to gravitate towards The Scenic Stage. The buzz and excitement ahead of Mitski's appearance was almost palpable. The park was packed, the South East Coast had been blessed by the weather and the proceeding artists had all played their part in building to the sublime finale.

"My name is Mitski....what's your's?" Mitski asked as she took to the stage to close out Leisure Festival with a 21 track setlist that never failed to deliver. From the opening notes of 'Love Me More' to the encore track - 'A Pearl', Mitski owned the stage and mesmerised the crowd. Mitski delivered a superb performance of, arguably, her latest album's best track - 'Working For The Knife', as well as 'Laurel Hell's other highlights - 'Heat Lightning', second single - 'The Only Heartbreaker', 'Should've Been Me' and 'Stay Soft'.

Karate kicking across the stage, Mitski's delivery was faultless and akin to performance art. You couldn't take your eyes off Mitski as she prowled the stage, restlessly strutting from one side to the other as she sang fan favourites - 'I Bet On Losing Dogs', 'Washing Machine Heart' and 'Me and My Husband'. The audience were word perfect and in fine voice as they sang along to a very well thought through set that balanced new and old, mixing upbeat with a a dash of somber very effectively.

In her full length navy dress, tied at the waist with a slim belt, Mitski looked almost regal as she continually delighted her hoards of fans with tracks from her impressive back catalogue. Mitski played songs from her last five albums including - 'Goodbye, My Danish Sweetheart', from 2013, and 'Townie', 'Francis Forever' and 'I Will' from 2014's 'Bury Me At Makeout Creek'.

Two of Mitski's many set highlights came courtesy of 2016's standout album, 'Puberty 2'. The powerful and evocative - 'Your My Best American Girl' sounded awesome as it rang out around Dreamland, as did the penultimate track - 'Happy'. As the strobe lighting flashed to the beat of the opening bars you were left in no doubt that you were witnessing a very special performance from a very creative and individual artist. A stellar finish to a fantastic performance that capped off a great day in Margate.