Wiltshire singer-songwriter Luke De Sciscio, formally known as Folk Boy, is set to release is latest album - 'The Banquet' via AntiFragile Music on 24th June. De Sciscio has embraced a broader soundscape on his new project and has incorporated elements of Baroque, Folk-Rock and Chamber-Pop into the mix. Luke's new record took him three years to complete and "sounds like a single coherent and turbulent dream" that is "permeated by the ethic of forgiveness".  Luke says that 'The Banquet' is "a love album. Not some surface level, Hollywood romance two-dimensional, veneer type thing, but a searing look into the dark, where the monsters of our past enact ramifications in our present. It’s an invitation to break bread with those monsters and to take full responsibility for them, to forgive them and accept them. To rise above them, not without them, but on account of them." Following his recent tour, and just ahead of the album's release, we caught up with Luke to find out a little more. 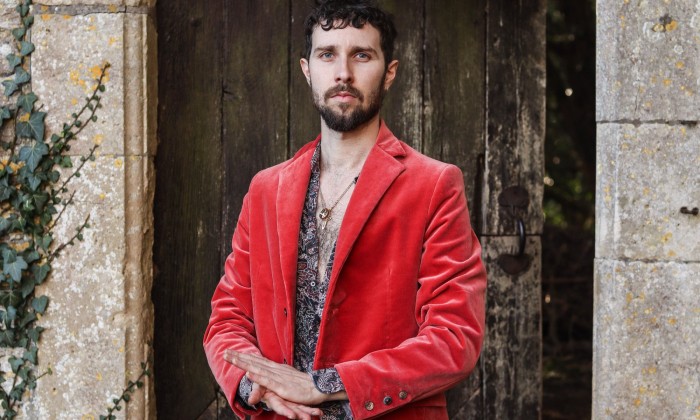 I call the 'folk' stuff - folk. But it never really was 'folk' except in theory: of the people, unguarded, expressions of time - never new, never old.    But, all of that 'folk stuff' taught me a million things, on The Banquet, which I don't think I can reasonably call 'folk', I tried to express it all.    I tried to take the whole idea of 'creation' to its fullest expression.

So, practically, in a sonic sense, that means The Banquet kind of sounds like a single coherent and turbulent dream, it twists and coils and never stays in one place too long - like you're moving through a trip, various kaleidoscope halls each dressed in their own expression. It was a meticulous project.    Layers and layers of individual instances over the course of 3 years.

There were things that at the time seemed unfair and challenging. But, looking back on the whole journey, at this point, with The Banquet done, I realise that if anything had been different, this wouldn't be the case and I'm really happy it is. I think this album has a lot of value. I think it's significant. And, whether that's only to me, or for anyone else, isn't really my call - but, I got to the heart of me - that means something. If it weren't for the 'challenges' - I just wouldn't be sitting here, writing this about these songs.

So much of that is just having the courage to be yourself and put your own name proudly in other people's mouths, which starts, in your own. People used to struggle pronouncing my name. Those days are melting away. I've never done this with the intention of fame or any of that stuff - for me, it's always been a process of reaching in, deeper, and offering more outward. In that sense it is like the skin is a mirror, because the further I have travelled inwards, the further the tendrils of my expression have reached out.

I don't know if it's about 'control' per say. In fact, even the folk songs were largely about letting go. But, The Banquet, to an even fuller extent was a record, a release, an idea about forgiving that which is outside of one's control. So, a huge amount of the process was about trusting the opportunities that life put in front of me. Following my whims. Be that inviting a stranger to fully express themselves on the recordings with no input from myself simply because of a feeling. Or be that, trusting the initial take that, at first, didn't sit where it tried to. Everything on this album was permeated by the ethic of forgiveness. That is how you realise a vision, you inhabit it, you live by it. The Banquet: to invite your demons to the table, to break bread, forgive them, find peace. That energy became the reflection and the album stared back.

It is just a feedback loop. Like a songbird, nature flows in, notes come out. Life goes in, it manifests in song. There's a narrative I live inside, like all of us. There's a story that I'm telling myself, whilst simultaneously knowing how easy it is to step outside of the page. And, it's just like a slime mould really, I've reached outward, I've reached inward - the songs are just the place where those two poles meet.

I would not choose. I'm here and I'm happy and whatever happens, happens. The Banquet took me three years to complete. At first it was in spontaneous dribs and drabs, I would plough the field until my shoes were soaked and then I'd retreat back into the self-less expression of folk songs - maybe make an album - but, for at least the last 16/18 months, The Banquet was an everyday, all day thing. I don't think many people realise the extent to which it has to consume you. And, you lose people, you lose touch, you lose memories - but I have made peace with the process, I am grateful for what came and went and I live in the reality where this thing is done. No one, nothing, can take that away. It's a fully crystallised version of an ephemeral and vast idea.

Just, to realise myself to the fullest extent. The scope of my vision is far bigger, more all-encompassing than writing folk songs would perhaps ever have enabled, so - my only aim now is to stay true to myself. Not lose myself. Keep myself. And, keep following it.

'In A Moment Just Like This One' will have had BBC6 radio play, maybe RADIO 2, I will be booked to play Glastonbury, I'll be touring to rooms of my own crowd singing these songs. I'll have a band join me when appropriate, maybe the one on the record. Money wont be an issue. I'll still be singing in care homes, playing in open mics when I want to, because I love it. But, it will be dawning on people, what The Banquet is. What I've made. A lot of people will be able to pronounce my name.

You should expect the remainder of the album. It isn't really the kind of album you can do justice to with singles, that's just a by-product of the formulaic industry narrative. It's a single body of work - a record. When that is out in the World and belongs to everyone else, you'll know that expectations are a limiting factor. I just am ready for you all to hear it. I'm ready for whatever it brings. I'm at peace with myself, sat alone, in a room. I'm at peace with myself travelling this World. I've had opportunities that seemed seismic and they vanished without a trace, I'm at peace with losing. I'm at peace with whatever it does ...I feel like I know what it has the potential to do. I feel like I can see the fullest expression of its potential. And, I can try and throw words before myself to give the World something to lap up - but ultimately - all I can expect of myself, and all anyone else should expect, is that I will not compromise. I will keep being true. I will keep digging down. I will keep giving out. I am a one trick pony, and that is 'truth'. I am addicted to red-pills. Wherever the flow goes, I'll be. And The Banquet took me through some dark, and light . . .I'll just carry on, set to broadcast, and let the constant amongst the chaos be love.