Not another kooky new female artist, I hear you cry. Well yes it is I'm afraid but Jessie Ware is worth sticking around for. You would think that all these reams and reams of female artists emerging this year would start to sound the same around now. But this twenty-something singer/songwriter has used a fresh arrangement of her soft warming voice teamed with a wonderful mixture of balanced beats and unique sounds to give 'Devotion' a chic edge. It's no wonder her name has been thrown about for a good year and a half now, since she helped out old chum Jack Penate with in his backing band and her work with Sampha and SBTRKT. 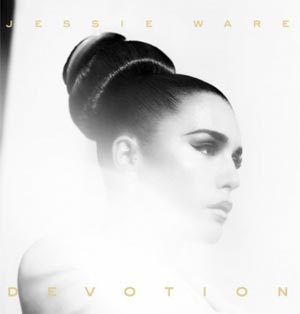 Ware's previous two singles 'Running' and '110%' find themselves on the album and they still stand strong, if not stronger against the other examples. '110%' has arguably one of the best choruses of the electro singer/songwriter genre seen this year. 'But I'm still dancing on my own' patters over the springing beat and the deep vocal effect that crops up gives the fluffy track a bit of weight. The laid back textures in 'Running' initiate temptation to sway and a middle section of belting vocals allows a clear view of Ware's dynamic capabilities.

The structured beat of 'Wildest Moments' is like a slightly down tempo sample of somewhere between MIA's 'Paper Planes' or The Big Pink's 'Dominos.' It provides a resilient backing for Jessie Ware's gliding voice. The brilliant 'Still Love Me' has an effortlessly golden chorus of pop joy with the repetition of 'Do you still love me' in some harmonic variations. 'No To Love' follows on with its slightly simmered down manner, but the subject of 'love' makes it sound like one lengthy track. The reoccurring 'who says no to love?' begs questions like the previous track in its lovesick daze.

'Taking In Water' and 'Night Light' present Ware's unbound vocal. Her foamy, mellow voice is suddenly given a bigger opportunity. It's as if she wants to prove to people her talents don't just lie in her incredibly chilled vocal tones as seen in the majority of 'Devotion.' 'Something Inside' has a beautiful selection of noises that sound a little disjoined, in a good Jamie Woon way. However lyrically it's not a track that immediately jumps out to you in its brilliance. The songs around the middle of the album are a bit tricky. 'Swan Song' and 'Night Light' just lack an original kick to them, compared to some of the other gems.

'Devotion' proves why there's been scattered hype flying around about Jessie Ware. It holds some strokes of genius and it just really is worth making some time in the hectic everyday schedule for Jessie Ware. With a bit of luck the calming, reflective mood to may even brush of on you.