Review of Spacehopper Album by Tripwires

Spacehopper is one of those records that feels like a living piece of history; in terms of influences, you simply can't move for the sounds of British bands from the nineties or, if your prefer, British bands who've now reformed who had their heyday in the nineties. A read through Tripwires' press attempts to dispel the feeling that everything's a bit TFI Friday - they claim to be prodigal sons of Talk Talk and some ridiculously hipster outfit featuring Vangelis - but their judicious use of drenching guitar effects and singer Rhys Edwards fey vocals leaves little room for doubt. 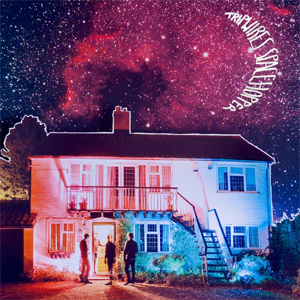 A good job, then, that we here at Contact Towers are a forgiving bunch and that, after all, we're suckers for anyone who sounds like a shoegazing obsessed hybrid of early Blur, early Verve, early Radiohead and early Suede. Aim high we say. Having moved away from an adolescence of covering Slipknot by the school tuck shop, the quartet make much of their tightness as a unit, a togetherness that's stopped much from the outside creeping in. It's this singularity of vision that makes Spacehopper such a retro-slamming blast, although for anyone that's grown up in the post Arctic Monkeys world of short arm chops and snotty provincial ambivalence, much of it may remain an incomprehensible hippy mess.

For those with Snapchat attention spans there are times it'll all probably get a bit too complicated. The start of Love Me Sinister is coiled in feedback and the pedestrian tempo requires patience, but burns like embers, whilst the nearly eight minutes of Tinfoil Skin recalls the long forgotten Catherine Wheel during their brief pomp before they were steam-rollered by the Cobaininator. Both are nods to a period defined more by musicianship as opposed to a desire by bands to entertain per se, but it's on the strung out country rock of Slo Mo that they finally track down their groove; one which they must've have dug through a few crates worth of charity shop albums to get sufficient inspiration for.

If that's all a bit Snub TV for you, there's still goodness to be found when they get their dander up as well. Shimmer takes all the ennui of Brett Anderson and throws it across the knees of peak-era Ride, giving him a good spanking in the process, whilst Plasticine's wah wah/grunge hybrid lets you mosh and shake at the same time. They're both good, but it's on the title track that they throw the cloak of festival main stage colours around; Edwards hisses out the refrain "I will let you down" dissonantly, almost like a man hanging on to his mike stand in the spotlight because he's got nowhere to go; a wasted little princelet being drowned in the reverb crashing down around him. It's at this point that you're glad he hasn't got any mates - apart from his fellow band members - and Talk Talk? We can confirm that Mark Hollis is totally MIA here.  Not yet truly unique enough to dazzle, Tripwires may yet have the guts to throw the time switch to "Forward". Who knows what might happen then.