Peering through the obfuscation of more than twenty five years, it probably seems to the average Joe that the summer of 1985 belonged to the notion of rock music completing its catharsis from being just a symptom of teen rebellion to voice of a global conscience. It was a period that climaxed with the original Live Aid, Bob Geldof's over-developed telethon that changed everything it touched whilst simultaneously triggering the new wave of stadium rock tradition which persists in rude health today. 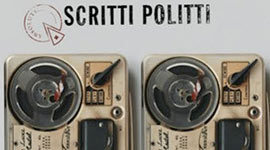 Thematically, music as a BIG idea is a reasonable assumption for the time, but by and large the record buying public were too close to understand it's long term significance. Without a check shirt or sweat soaked vest in sight, Scritti Politti's single The Word Girl had a few weeks earlier reached the dizzy heights of six in the nation's singles charts - this being an era in which the charts still mattered. With its lilting ska chops and singer Green Gartside's reedy, crystalline vocals, it was a record that had obviously caught the imagination, but was the clear apotheosis of Bono and Freddie's unit shifting chutzpah.

For Gartside it constituted a personal triumph. Having formed Scritti whilst at Leeds College of art in 1977, he'd masterminded its first iteration on the lines of a collective, a group of radical thinkers who were also alumni of a small and claustrophobically insular post-punk scene in the city which also spawned The Mekons and Gang of Four. Later relocating to a squat in Camden, the band's early lineups were fluid and - true to the DIY aesthetic of the time - their early releases came wrapped in handmade sleeves.

Leading a lifestyle which social care professionals now glibly describe as chaotic was however soon to hospitalise the Welshman, and after some personal reassessment of Scritti's direction he moved the now more stable band onto the Rough Trade label and subsequently released 1982's Songs To Remember. Whilst this new more professional ethic showcased a commercial dimension to his songwriting, Gartside was to find to his frustration that fans of more mainstream outfits like ABC and The Human League were less than willing converts to it, despite the overwhelming support of the more serious music press.

It was its successor, the clumsily titled but effortlessly pristine Cupid & Psyche '85, that finally connected him to the mainstream. Now working with drummer Fred Maher and keyboardist/programmer David Gamson, it combined the newly created technical backwash of samplers and the studio-as-an-instrument idea with an intelligent, romanticised take on modern soul inspired by Michael Jackson and a host of classic sixties back catalogue. The Word Girl in fact was the final thread of a chart-bothering triptych whose other constituents were Wood Beez (Pray Like Aretha Franklin) and Absolute, the modernist like of which left box office favourites such as Bruce Springsteen looking like production dinosaurs.

If you're patiently reading this piece and wondering why it's focusing on the events of more than a quarter of a century ago, this I have to say is because the central tenet of making this collection appeal is based around reminding you nostalgically of Scritti Politti's distant salad days. It's track sequencing underlines this even more starkly - the first quartet are all culled from Cupid & Psyche, whilst debut single Skank Bloc Bologna is buried almost apologetically at twelfth - and if any bigger clue were needed, well a glance at the title should suffice.

Scritti have released other albums since of course, and had a scattering of other hits, so 1988's anodyne Oh Patti and the collaboration three years later with Shabba Ranks on She's A Woman both feature as you might expect. More off the beaten track, Anhomie & Bonhomie's Tinseltown To The Boogie Down and Umm sound as intriguing now as they did when they arrived, the latter a curio that spliced hip-hop with more traditional (For Scritti) rock, producing out-there results. More disappointing, Gartside also phones in a couple of new efforts to round things out, but neither the r & b influenced A Day Late And A Dollar Short or A Place We Both Belong are going to win over many new fans and even more frustratingly, there's nothing from 2006's Mercury nominated long player White Bread, Black Beer to help underline his last mini-renaissance.

He still of course has some fine, if old, laurels to rest on. Song's To Remember's best moments are subtler mementos, especially the lilting Asylums In Jerusalem, whilst on The Sweetest Girl he pre-empted the reintroduction of transatlantic influences on British music that had been formerly so despised by the punk movement Scritti grew out of. Add these to Absolute and Wood Beez and you have a legacy which many artists this century would guard jealously.

Underneath all this the public image of man/band remains enigmatic; popular myth would have us believe that Green's genius-spawned psychological fragility has been the main reason that Scritti Politti aren't mentioned in the same hushed tones as Joy Division, or The Smiths. Absolute shows that the truth is more grounded, a trail of stubborness and missed opportunities leading to a creative cul-de-sac that thousands of other mortal, flesh and blood pop stars have also suffered from. But at least we'll always have the summer of 1985.