R.E.M. (formed 1980) R.E.M. is an alternative American rock band. The lineup of the band consists of Michael Stipe on lead vocals, Peter Buck on guitar, Mike Mills on bass guitar and Bill Berry on drums and percussion.

Formative Years: Michael Stipe met Peter Buck in 1980 whilst Buck was working in a record store in Athens, Georgia. They shared a love of bands like Television, Patti Smith and The Velvet Underground. The pair of them soon met Bill Berry and Mike Mills, who were students at the University of Georgia. Their debut gig as a band was at a friend's birthday party in April 1980.

I.R.S. Records obtained a copy of R.E.M.'s demo tapes and signed a contract with the band, despite R.E.M. having been courted by RCA Records. The Chronic Town EP was R.E.M.'s first major label release.

Debut album onwards: R.E.M.'s debut album, Murmur, was released in 1983, to huge critical acclaim. Rolling Stone magazine made the album its record of the year. Their first national TV appearance came in October of that year, when they appeared on Late Night with David Letterman. They performed 'So. Central Rain (I'm Sorry)', which became the lead single from their second album, Reckoning.

The third album from R.E.M. was 1985's Fables of the Reconstruction. It was produced by Joe Boyd, who had previously worked with Nick Drake and Fairport Convention and they recorded the album in England. The resulting recordings were seen as a departure from the quality of their predecessors.

Life's Rich Pageant was released in 1986 and was recorded by John Mellencamp's producer, Don Gehman, who raised the profile of Stipe's vocals in the songs. The track 'Fall On Me' became popular on commercial radio.

In 1990, following a 12-month break, R.E.M. reconvened and recorded Out of Time, using the mandolin, organ and acoustic guitar to break away from the expected sound of alterative guitar bands. The lead single, 'Losing My Religion', became a massive worldwide hit, as was its follow-up, 'Shiny Happy People', featuring Kate Pierson of the B-52s.

The next album from R.E.M. was 1991's Automatic for the People, another huge global success. Many of the tracks featured string arrangements by John Paul Jones, Led Zeppelin's bass player. Again, the album spawned a number of global hits, including 'Man On The Moon' and 'Everybody Hurts'.

In 1994, R.E.M. released Monster, intended to be a more upbeat album, after the two slow-paced releases preceding it. The album featured the popular tracks 'What's the Frequency, Kenneth?' and 'Bang and Blame'.

In March 1995, Bill Berry suffered a brain aneurysm and collapsed onstage in Switzerland. Although he recovered within a month, the band was plagued with other health issues, as Mills required abdominal surgery and Stipe also required emergency surgery to repair a hernia. The following year, however, they still managed to release an album, Adventures in Hi-Fi, having re-signed with Warner Bros for a staggering $80 million contract.

In April 1997, Bill Berry left the band. The remaining three members decided to carry on as a three-piece. For their next recording sessions, they hired Barrett Martin, formerly of Screaming Trees and Joey Waronker, Beck's touring drummer. Despite troubles and tensions during the recordings, Up was finally released in 1998, with 'Daysleeper' being the lead single from the album. The following year, they released the instrumental score to Milos Forman's Man on the Moon. The film was an Andy Kaufman biopic and starred Jim Carrey as the lead character and Courtney Love as his girlfriend. Also in the film were Danny DeVito and Paul Giamatti.

R.E.M. then released Reveal in 2001, with Waronker drumming, as well as Scott McCaughey of The Minus 5 and Ken Stringfellow of Posies.

Around the Sun was released in 2004. The lead single was 'Leaving New York' and around this time, the band hired a permanent new drummer for the purposes of touring, Bill Rieflin. Rieflin was previously a member of Ministry. That year, R.E.M. joined the Vote For Change tour, with Pearl Jam, Bruce Springsteen and Bright Eyes.

Whilst rehearsing for their induction into the Georgia Hall of Fame, R.E.M. also recorded a version of John Lennon's '?9 Dream' for Amnesty International.

Accelerate was released in 2008, following recording sessions with the producer Jacknife Lee. The album debuted at the number two spot on the Billboard charts.

R.E.M.'s music has inspired a number of bands, most notably Nirvana. Lead singer Kurt Cobain was vocal in his praise of the band and he and his wife, Courtney Love, of Hole, became good friends with Michael Stipe.

The last few days have been difficult for a lot of people as we come to terms with the loss of British TV presenter Caroline Flack. She took her own life following a relentless assault against her character by the tabloid press as she struggled to deal with her relationship, a court case and losing her job.

Now social media has been flooded with messages urging people to "Be kind", because we never know exactly what someone else is going through. If you ever feel low enough that you are considering taking your own life, we believe that music can help you reconsider...

Continue reading: Songs To Play When You Feel Like There's No Way Out [Playlist]

The 58-year-old singer - whose band REM disbanded in 2011 - was "surprised" at how comfortably he settled back into the recording studio while producing Fischerspooner's new LP 'Sir', but he insists the experience wasn't enough to make him want to set down his own track.

He said: "[Producing 'Sir'] definitely brought me back to music in a very unexpected way. I had had a good five years off, away from writing and composing.

A couple of weeks ago we told you about the video that Idris Elba had made for Mumford & Sons, now another interesting mish-mash of musicians and actors have joined forces for another video, and this time around it's a video for REM directed by James Frano, with Lindsay Lohan making an appearance. A truly odd mix of people. But c'est la vie, it could be good.

In almost 6 minutes of film, the tone is very much the same: jaded America. The 'song' is less a song and more a fairly good example of spoken word poetry by Michael Stipe ("I can be bad poet / Street poet / Sh*t poet / Kind poet too"). Both verbally and visually, with 'lyrics' such as "Twentieth century, collapse into now /Cinderella boy you've lost your shoe" and images of strip clubs and the words 'has been' popping up on screen, the despondency is clear. It's somewhat reminiscent of Godspeed You! Black America's stunning track 'Dead Flag Blues', though REM's 'Blue' holds out much more hope. James Franco's done a stirling job of matching the video to the track, in a way that Elba failed to do with Mumford & Sons. And Lohan basically just plays herself, appearing ina  black leotard, with platinum blonde hair, biting her lip in front of a camera. Good job LiLo.

Lifes Rich Pageant remains a key milestone in R.E.M.'s extensive back catalogue. This was after all the moment that inaudible lyrics and murky soundscapes gave way to big guitar riffs and even bigger drums. Outgrowing the confines of their niche college rock appeal; Buck, Berry, Mills and Stipe were faced with creating a different type of record. The new deluxe box of the bands 4th studio effort celebrates the leap forward that they took towards international success.

REM, I feel, do not get enough credit for the way in which they've grown old gracefully. Without mentioning any names, (U2) many other mega bands have found it hard to enjoy a long career without going all David Brent and having a mid life crisis. By this I mean trying to 'shake things up' in an attempt to adapt to the Itunes generation. Why bother adapting to a generation that only listen to an album for however long it takes them to get off the treadmill or reach their stop on the Tube? If you've already got a massive and I mean massive established and loyal fan base, why not just stick with them and make the music you want to make? New generations of fans can dig it if they like, and if not they can stick to the latest one album wonder doing the rounds.

Every REM album since 1994's disappointing Monster has been described by one critic or another as a 'return to form'. Personally, I'm not convinced that the band are capable of making another album as good as Reckoning or Automatic For The People; when you've been writing and playing music together for several decades, it must be difficult to stumble upon exceptional new ideas. This needn't be a problem, though; a second-rate REM single is still a hell of a lot better than anything most other guitar bands can conjure up, as 'UBerlin' amply demonstrates. 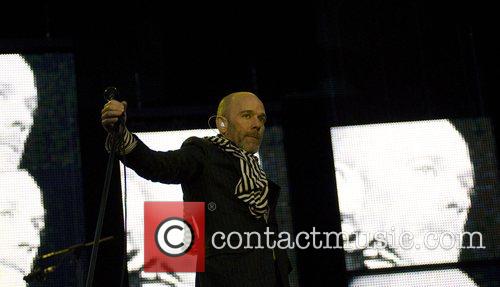 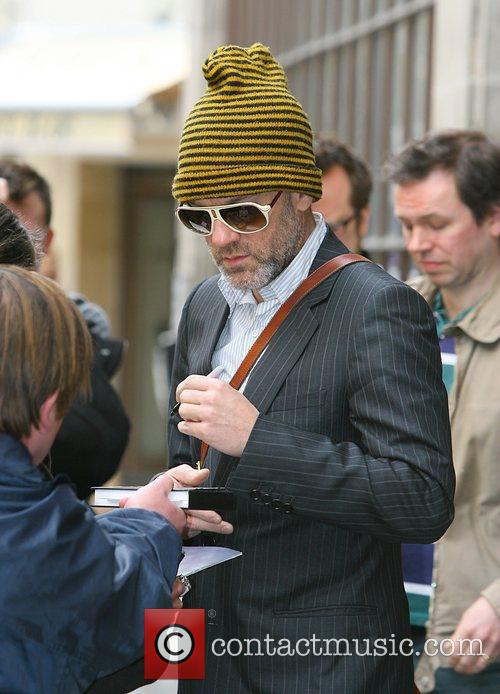 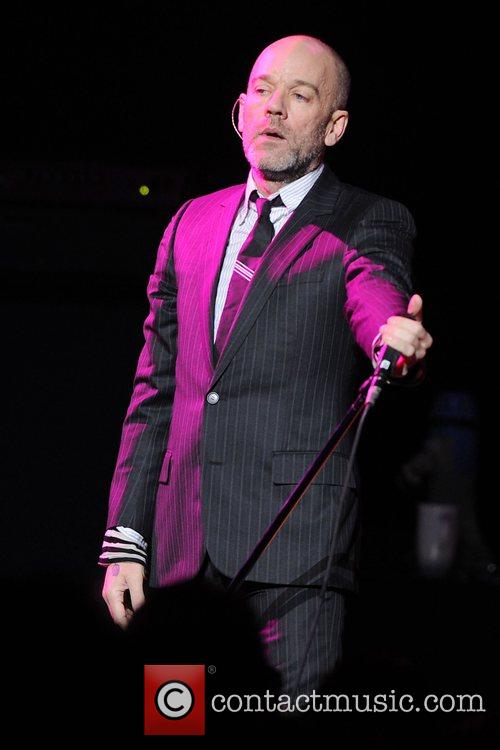