A sunny Thursday afternoon and we are out and about the Splendour site, looking at what goes on behind the scenes. Anton, the main organiser, explains, "We've really tried hard to put a line-up together where everyone in a family wants to see someone, we really want to maintain that family atmosphere", and with this year's festival selling out, it's clear that the organisers have got it spot on. We also manage to catch up with Confetti who have their own stage every year and tell us how the apprentices gain their experiences by running the stage from cradle to grave. Over on the main stage, you don't realise how big it is up there until you are up there, seeing where all the kit is set up ready to be rolled on stage. 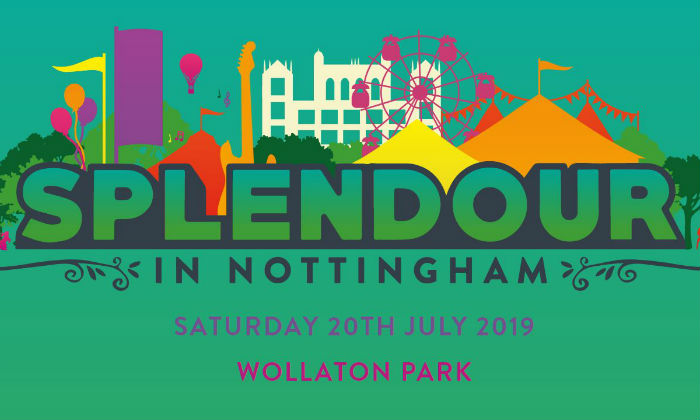 To the day itself, no-one expected that we were in for a day of the four seasons weather-wise, but that is what we got. Showers up until about 3pm, but they couldn't dampen the spirits of the crowd who were armed with their ponchos and brollies like old pros. The rain seemed fitting at The Courtyard Stage, and the darkness only added to Laurie Illingworth's set as she pulled crowd from the shelter, jokingly saying "I'm fine under here but thanks for coming closer and being a part of it."

The Slow Readers Club may have been the underdogs on the main stage but they delivered a stellar set, blasting the big numbers from the start such as the brilliant 'Lunatic'. For those who are unfamiliar with the group, I can only describe them as Editors meets Interpol.

Over on the Confetti Stage, Ash kicked off the 90s party, with All Saints and Manic Street Preachers ready to follow and show the quality that came from that era. These guys absolutely nailed it and were indeed the highlight of the whole day. They smashed hit after hit out of the park and ended on the unpredictable note that was 'Burn Baby Burn'.

Rag'n'Bone Man bellowed out his best tunes, with an interesting rendition of 'Human' to finish where he reached back to his roots with an excellent rap number.

The Specials seemed to bring in the biggest crowd with classics such as 'A Message to Rudy', 'Rat Race' and 'Embarrassed by You' which - like the weather earlier in the day - went down a storm. There were also some new tracks from 'Encore' but, most unfortunately, there was no 'Ghost Town'.

Headlining the Confetti stage, All Saints not only treated festival goers to hits such as 'I Know Where It's At', 'Pure Shores' and 'Never Ever', but also showed off some serious dance moves.

The finale marked twelve years since Manic Street Preachers last played at Nottingham, and when they came on stage they made sure that they were going to grab everyone's attention with the high energy, blistering 'Motorcycle Emptiness'. With a back catalogue like they have, there were so many songs to choose from that whatever they picked for the set list was going to go down a storm. 'You Love Us', 'Your Love Alone Is Not Enough' and 'If You Tolerate This Then Your Children Will Be Next' were all massive highlights, not to mention Guns N' Roses cover 'Sweet Child O' Mine' and then festival closer 'A Design For Life'.