Incarnations - With All Due Respect Album Review

Review of With All Due Respect Album by Incarnations

A collaboration of Daniel Collas, Quinn Luke and Bart Davenport, 'With All Due Respect' was recorded at a small family run studio on the southern Spanish coast in October 2009. The trio were brought together by the Lovemonk label, on which this record is released. 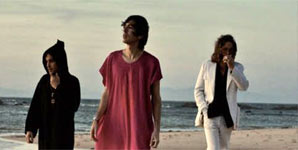 The opening sounds of soft rolling waves very much sets the tone for 'With All Due Respect', with first track 'Make You Mine' a pleasant combination of acoustic guitar and organ to back lifting harmonies. It really does transport you to a place on the beach and is at the core of most of the record. 'Meet Me At Midnight' is an escapist indie number with subtle yet intricate guitar work, while 'Up From The Ground' and particularly 'Hindi Ko Alam (An Ode To Friendship)' are celebratory sounds that keep the mood up.

Incarnations are also very capable of capturing a different atmosphere, as exemplified on 'I Don't Know', a slower number that encapsulates solemnness. Finale 'Sunset On Punta Paloma' is the sound of the closing minutes at dusk and appropriately the same waves that began proceedings bring them to an end. It brings the curtain down on a warm and accomplished album.

Incarnations - With All Due Respect