By Lauren Mullineaux on 19 December 2011

Hymns are a two-piece from the Midlands, fronted by former Blakfish guy Samuel Manville. They are, it must be said, one of the least religious bands to come from the Midlands-don't let Google convince you otherwise. 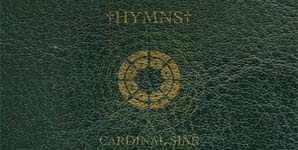 For their debut album, the clever fellas decided that a double sided record on Cardinal Sins and Contrary Virtues was the ideal way to go. I mean, what else were they going to do in The Midlands, act in something by Shane Meadows?

Bookended on side A: Cardinal Sins with a 'Prologue' and on Contrary Virtues by, yes, you guessed it, 'Epilogue'. It's a rather spiritual choir doing what choirs do, before they get into the album proper, with lyrics like, "Put your neck in my hands and I'll squeeze it, you feeling queasy yet? Cos you should." Perhaps this is religion in the 21st century; perhaps this is religion by a former Roman Catholic; perhaps this is religion as done by a cutting edge indie band, though I'm not quite sure how indie they are. Maybe, though, it's something more sinister, like an organ player who loves a good neo-classical pastiche and a decent movie soundtrack?

These 16 songs breeze by in the same way that all three minute alt-rock songs do. These are tracks that sound slightly familiar but then it's hard to pin point what exactly about them is familiar; is it a certain melody or an entire vocal style? Quite quickly you will notice that these songs start to merge into one another, but then they have tracks such as 'Perseverance' which, with its deep; dirty; tuneless hypnosis, transports you into a different realm; one far from heaven it should be said.

The difficulty with +Hymns+ is deciding if they're actually any good or not. It's easy to fall in love with their rigid guitar strumming, analogue drumming, and concept style lyrics which are all pinched together with an under-produced sound. Then again, these are also the reasons why it's very easy to hate them. They have a sound and style which can easily be labelled "hipster" and their purposefully challenging lyrics; "This ain't no martyrdom, I'm fucking confident," which border on obvious cliché for a reason could and no doubt will be called contrived.

Full of the vim and vigour of the miniscule British Hard-Core and Alt-Rock scenes, Cardinal Sins channels the classy accented wit of Reuben with the punchy panache of early Funeral For A Friend and the melodic pop sensibilities of Hundred Reasons. These eight songs, most notably 'A Punch To The Temple' and 'Wicked Tongue' will win them the fans they so desperately deserve. Contrary Virtues, on the other hand, is the band in more experimental slow motion.

It's not that 'Miracles' is a bad song but it just sort of passes you by, after the tenacity of the first half an hour. Not until 'Mercy Seat' do we get another tongue twister to wrap ourselves around. The stonewash guitar here is mesmerizingly layered around a bursting drum track on one of the most complex songs so far. Not content to leave behind their pop leaning they experiment, Dresden Dolls style, on 'Diligence' and you should thank them for doing so because an accordion, a keyboard, and a Dickensian nursery rhyme, "I made a promise I'm sticking with you, I'll back off while you make a move, oh my dear you move me to tears, I'm crying for help, but there's nobody near to hear or care," add up to make one of the finest moment on the record.
It is this sort of simplicity and confidence in their abilities that will ensure +Hymns+ does for British Alt-Rock what Hurts did for British Pop.

You might loathe this record with every fibre of your being. You might think it sounds raw and un-finished and it might make you violently angry. Or you might just discover a sensational new band that has the potential to become very big indeed. Whatever your line of thought and reason, this is one band who are doing everything they can to ensure their fate is in their hands, because they just don't believe in the Gods.