Manchester's Help Stamp Out Loneliness have crafted a great, up-tempo album packed with brilliant summery moments. As a debut album, it shows a great deal of promise. 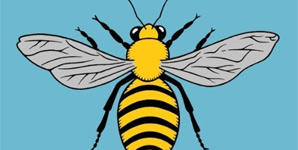 Cottonopolis and Promises open proceedings with a gleeful stomp, and breezy layered harmonies. It is brilliant piano pop and as such is fairly representative of the rest of the album, which is, for the most part, a fairly accessible indie pop record. Elsewhere, The Ghost With a Hammer In His Hand shows this formula in full effect again, with the synths taking centre stage.

There are more guitar driven numbers on offer here as well, such as the folky Angelyne, with its delicately picked chords and laid back percussive attack. Record Shop again has the guitars stepping forward on what is easily the best song on the album. It is here that the vocals which sound a little bit like Nico - all deep and sultry - and beautifully formed lyrical couplets such as "I could come around and eat you up/have you got some wine to wash it down with?" are showcased to their full effect. On the other end of the spectrum is Biergarten; an almost entirely synthesised number that could have easily fit on the latest Strokes album. There is a lot of variety on offer here.

Help Stamp Out Loneliness is not without its flaws however. Most of the songs clock in at over 4 minutes which, in itself is no bad thing, but the album all in is just under an hour long and so a lot of the songs later in the album seem to drag and become forgettable in the vast amount of music being thrown at you at one time. Simply, the songs are not distinctive enough to hold your attention. A brilliant song like Me, Sola and C on its own is awe-inspiringly tender, but on the album it feels lost.

This is a band with a lot of potential and with time, will only grow into something more special. The album sounds like it was recorded on a shoestring budget, and there are just too many songs all at once, but when Help Stamp Out Loneliness get it right, like on Record Shop or Biergarten, they truly shine.