It has been said that a truly great song can be stripped down to a basic vocal and instrumental accompaniment, and still be every bit as powerful and affecting as a full band version. This is the approach Chris Cornell has taken on Songbook, a live album collecting an impressive array of cuts from his solo acoustic tours. 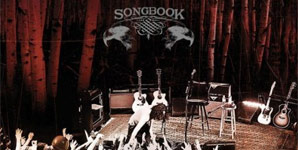 The sheer range of material included here reminds you how varied and interesting Cornell's career has been. You get a couple of Soundgarden tracks, six of his own solo songs, some Audioslave tracks, some Temple of the Dog songs and even a few covers just for good measure. You cannot feel ripped off by so much back catalogue rummaging. There is indeed something for everyone in the Songbook.

Even though the songs are stripped back to their barest of bones, none of the songs particularly suffer from their lack of instrumentation and in fact, some are even enhanced by it. In particular, the overworked hip hop stylings of Ground Zero from his last (and incredibly controversial) solo effort Scream is turned into a kind of funky work out that allows Chris's voice to really shine, which, by the way, is stronger than it has sounded in years. Call Me a Dog from the Temple of the Dog album becomes a beautifully delicate track, even more fragile than its original album version. Soundgarden's biggest hit Black Hole Sun is transformed from Beatles-esque psychedelia into an even more haunting, sinister tune. All of the Audioslave tracks are brilliant as well, some - I am the Highway and Wide Awake in particular - actually eclipse the studio versions by many thousands of miles.

Of the less familiar material, Cornell's re-workings of Led Zeppelin's Thank You and John Lennon's Imagine are fantastic, even if they add nothing to the originals. Cleaning My Gun is an unreleased gem from the Chris Cornell archive that has a lot in common with the Temple of the Dog tracks. It's pleasant enough, but had it been released before now, it probably wouldn't have set the world alight. If further criticisms are to be made, then one would have to say that Chris easily has enough amazing songs to fill a second disc. Imagine a stripped back Getaway Car, Hunger Strike or Burden In My Hand. I know for a fact that on the tour this album chronicles that Cornell played Soundgarden's Mind Riot almost nightly. Had this been included, I would wager that a large proportion of the 'Garden's fan base would have collectively lost its mind.

The collection finishes with a slightly stripped back studio version of The Keeper, which Cornell wrote for the film Machine Gun Preacher. The song is easily the best Cornell solo track since 1998's Euphoria Morning album, and proves that should the Soundgarden reunion encounter any hurdles, a new Chris Cornell solo record would not be such a bad thing.