Leeds-based metallers Chickenhawk are the perfect soundtrack to someone beating you over the head with a blunt object. Or so I like to imagine, anyway. Listening to Modern Bodies, their pleasingly ferocious debut album, one is reminded of the journalist who described the sound of early Idlewild as 'a flight of stairs falling down a flight of stairs'. Chickenhawk sound a bit like that too, except the stairs are on fire and the building's about to explode. 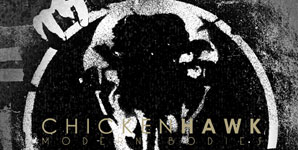 Drums clatter and pound. Riffs grind and bludgeon. Vocals seethe and scream. There's not much room for restraint here, or for moments of quiet reflection. Chickenhawk aren't bothered about restraint or moments of quiet reflection though, they just want to kick your arse. For the most part, this is an aim which they achieve admirably. The most obvious touchstone here is the Melvins, the grungey metal trio who a young Kurt Cobain once auditioned to join. Chickenhawk share the Melvin's dark intensity and their ability to write tight, tense mini-epics. The latter's boundary-pushing creativity is less apparent, although Modern Bodies does demonstrate an admirable disregard for simple, consistent time signatures, and the simple ferocity of the songs can hide a complex approach to songwriting which owes much to progressive rock and to post-hardcore bands like The Dillinger Escape Plan.

There is perhaps a danger that Chickenhawk fall between too stools. Their aesthetic may be a little too knowing and ironic for the metal fans. One song title asks, with an arched eyebrow, 'I Hate This, Do You Like It?'; other titles, such as 'Son Of Cern' and 'NASA vs. ESA', reference contemporary physics. Their music also has a complexity and free-wheeling structure far removed from the sound of commercial metal. On the other hand, fans of indie rock and punk music may find their sound too brutalising, and the riffing too overtly metal-influenced. Music fans with open minds will find plenty to enjoy here though. The angry ranting and frenzied drumming of opener 'Scorpieau' set up a consistently entertaining forty-five minute thrash. The best moments here are the two singles: 'NASA vs. ESA' arrives at its speaker-blowing climax via some oddly catchy barked lyrics ('Gateway! To the moon, man!/In a tin can!'), while 'I Like This, Do You Hate It?' pummels the listener into submission with killer riffing. The album never lets up though, and this is its greatest strength. A cohesive, consistently energising treat for fans of heavy guitar music.