Review of The Ties That Bind: The River Collection Album by Bruce Springsteen

Springsteen’s fifth album, and his only double studio offering, The River remains an important part of his back catalogue. Somewhat overlooked, it lives under the shadow of the likes of Born To Run and Born In The USA, but of all his projects it has perhaps the most interesting genesis. In 1979 he handed a single album – The Ties That Bind – into Columbia as his follow-up to Darkness On The Edge Of Town. Almost immediately he took it back again and continued working in the studio for a year. What eventually emerged commercially as his follow-up album was a 20 song, double disc offering, The River. 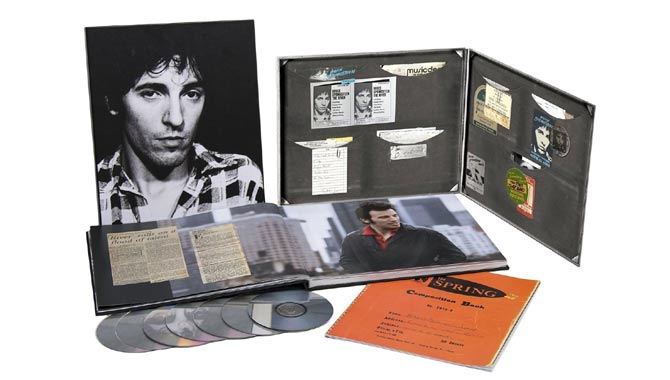 "I was trying to link this stuff up in a way where I thought I could save myself from my darker inclinations by moving into an imagined community where people were struggling with all of these things in a very real way, and that was the community I created on The River". – Bruce Springsteen

This new box set is far more than your usual compilation of off-cuts and spot the difference demos, it poses a question; was Springsteen correct in second guessing himself?

The Boss claims The Ties That Bind didn’t feel big enough, and wasn’t as exciting as his live shows, something he had yet to capture in the studio. If that was his modus operandi he certainly improved on his initial effort when The River was released. For the first time here, the commonly bootlegged The Ties That Bind has been released as originally intended alongside its big brother and 20 outtakes. This isn’t a fan’s interpretation of what the record would have sounded like, this is that single album as handed to Columbia in 1979, and now the real comparison can be made. Very few box sets of this type can claim to have such a compelling narrative at their core.

Is The Ties That Bind a better record? No, although it is more concise by its nature and contains a full band version of ‘Stolen Car’, which may be superior to the version found on The River. You can also understand why three songs were eventually omitted from the earlier track listing and replaced with the likes of ‘Out In The Street’ and ‘Independence Day’. It’s more than a curio though, as it gives an insight into the narrative Springsteen was trying to create. He wanted to populate his world with characters and also provide the music they would hear in bars and clubs at night. That’s what makes the fourth disc of outtakes here so interesting, eleven of these songs have never commercially seen the light of day before, and really they should have.

Of particular note is ‘Roulette’, which Springsteen concedes in the documentary portion of this box set, should have replaced ‘Crush On You’ on The River. There’s also ‘Stray Bullet’, which may well be one of The Boss’ finest ever songs, it’s almost amazing this kind of material was still sitting there in the vault. Indeed none of these outtakes are half formed ideas, the 20 songs on the fourth disc are perhaps best regarded as the flipside of the coin from The River, and they certainly work as an album in their own right.

Unlike other collections that are exhaustive, none of the material here feels like scraping the bottom of the barrel. it’s also worth remembering there are still River-era songs that no-one has heard. The context provided by the accompanying Thom Zimny directed documentary and its acoustic snippets, an incredibly lavish hardback book, replica lyric notebook, and two DVD’s of a live show from 1980, do mean a complete picture of the creative is provided though. Along the way even the most dedicated fan will discover new facts (‘Hungry Heart’ was written after meeting The Ramones), but unlike so many of these re-issues that are aimed squarely at the die-hards, I’d argue this provides value for money for anyone with even a passing interest in Springsteen. It’s a hefty price tag for any of the formats on offer, which is likely to dissuade some, however I’d happily sit and listen to this any day of the week, rather than 15 microscopically different versions of the same song which tends to dominate the content of similar box sets.