You've probably heard of Wiz Khalifa by now; the 'G-Mix' (sigh) of his single 'Black and Yellow' has been bothering the airwaves for a good few weeks, having reached number five in the singles chart. It's a perfectly acceptable modern rap song - slick production, infectious hook and shamelessly materialistic lyrical content all present and correct - but perhaps the track's most striking feature is the similarity between Khalifa and the man occupying the obligatory 'major guest star' slot - the ubiquitous Snoop Dogg. The similarities between the two are undeniable and, for better or worse, are prevalent throughout Rolling Papers. 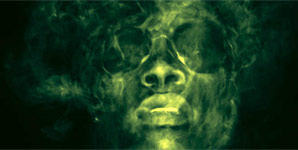 As any budding young rapper would, Wiz has ditched his real name - Cameron Jibril Thomaz - and opted for something a little less modest; he'll no doubt hope that 'Khalifa', the Arabic word for 'successor', will turn out to be a prophetic selection, whilst Wiz was chosen 'because I was good at everything I did' as a youngster; if that's the case, he mustn't have spent much of his childhood writing lyrics that were in any way engaging or fresh. In Wiz Khalifa, we have a rapper preoccupied primarily with high living, money and marijuana, whose presence and smooth delivery have thus far made up for a shallow lyrical pool. If this sounds familiar, it's because pretty much the exact same description could be applied to Snoop Dogg. That Snoop is instantly recognisable and irrepressibly charismatic has allowed him to ride out the changing face of rap music with a string of high-profile guest appearances on pop songs, whilst dropping the occasional banger to keep hip hop heads happy ('Beautiful', 'Drop It like It's Hot'). Conversely, Khalifa finds himself caught between the inventive hip hop he no doubt strives for artistically and the mainstream success he clearly craves, and this awkwardness characterises Rolling Papers.

It seems like a record of two halves. 'No Sleep', with its 'party all night' lyrics and summery, autotuned singalong chorus, clearly has both eyes on the Billboard Top Ten, as does the shamelessly jaunty 'Fly Solo', which probably showcases more of Khalifa's singing than it does his rapping ability. 'Roll Up' and 'Get Your Shit' are similarly chart-friendly and whilst they might well deliver to Khalifa more of the pop stardom he's already tasted with 'Black and Yellow', they'll also disappoint hip hop fans who saw genuine potential on his earlier, independent releases. Indeed, the flashes of brilliance on this album served only to leave me wishing Khalifa didn't feel he needed to run at 50% of his capacity to be successful; 'Star of the Show' combines a dreamy beat with Wiz's silky flow to great effect, whilst 'On My Level' shows us a more menacing side to his sound that's largely absent from the rest of the record. Even the relative lack of guest stars is both a blessing and a curse; whilst it at least lends some cohesion to an otherwise conflicted album, the laidback delivery is prone to becoming monotonous with nothing to break it up. As Khalifa's major-label debut, Rolling Papers seems like a missed opportunity - sure, he's probably crafted a slew of successful singles, but in doing so has failed to deliver on the creative promise his mixtapes hinted at.