Various Artists - We Were So Turned On: A Tribute To David Bowie Album Review

Review of We Were So Turned On: A Tribute To David Bowie Album by Various Artists

The influence of David Bowie on popular culture and music shows no sign of abating, even some forty-three years after his first record landed confusingly on an unsuspecting audience still very much in thrall to all things Beatles, Stones and Elvis. His chameleonic persona, ever changing from album to album both from a musical and aesthetic perspective, has made Bowie one of this and past generations most evocative pop stars. His legendary status pretty much assured back in 1972 (if not earlier) courtesy of the groundbreaking 'Rise And Fall Of Ziggy Stardust And The Spiders From Mars', a legacy that has subsequently continued via a plethora of landmark records ever since. While there's a school of thought that the quality control of his creativity has subsided somewhat since 1983's 'Let's Dance', its fair to say that even as recently as 2002's 'Heathen' he's still prepared to take risks, even if the results don't always match the ambition. 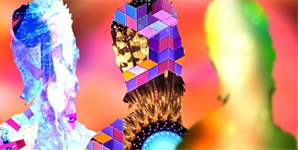 When the idea of a tribute album celebrating Bowie's collective works first came to fruition two years ago, the likes of Radiohead, Nine Inch Nails and MGMT were all rumoured to be on board for the project. That all of the aforementioned had to withdraw their commitments probably says more about the contractual nature of the record industry and harrowing tour schedules than any second thoughts about honouring the great man. However, with War Child supporting the project, and a total of thirty-four artists available to give their services to the concept, 'We Were So Turned On' became a reality, even if from an organisational perspective co-ordinator Paul Beahan must have had months of stressful nights.

Although not entirely blessed with that many major acts, 'We Were So Turned On' can be best described as a record filled with genuine sentiment rather than a routine promotional exercise. It's also interesting to note that some of the most striking interpretations are delivered by current artists not afraid to take chances where their own material is concerned either. Chairlift turn 'Always Crashing In The Same Car' into a minimalist commentary on social paranoia while A Place To Bury Strangers make glam standard 'Suffragette City' sound like an explosion in a crowded city centre, its finale reminiscent of several buildings falling down. Current press darlings Warpaint sprinkle their own psychedelic dust on 'Ashes To Ashes', while Mechanical Bride's loose take on 'Sound And Vision' is both subversive and kitsch in equal measures.

Of course the biggest problem with an album of this nature - and particularly size - is that for all its good intentions it leaves you wanting to listen to the real thing, and while the likes of Duran Duran and Japan's Mick Karn salute the man arguably responsible for their existence in commendable fashion, there's too much here that pales into insignificance when compared with the original recordings by the man himself.

Model turned singer and now French president's wife Carla Bruni's dramatic take on 'Absolute Beginners' won't alter too many people's perceptions of her artistic merits, although Voices Voices make a better job of 'Heroes' than the recent atrocity delivered by the X Factor contestants. Overall though, 'We Were So Turned On' could have been significantly improved by halving its contents although by the same token, if this compendium inspires any unassuming teenager to check out the Thin White Duke's back catalogue as a result, then one could argue it's a job well done for all concerned.