Review of Battle Born Album by The Killers

The Killers fourth studio album Battle Born is a frustrating record. Thankfully it abandons some of the keyboard and synth excesses of 2008's Day & Age, but you still get the feeling that Brandon Flowers has been trawling his record collection for inspiration a little too much. Equally it lacks the immediacy and anthemic simplicity of their 2004 debut Hot Fuss. There are many reasons why it's a difficult creature, but something that's not in question is that its heart is being worn prominently on its sleeve. 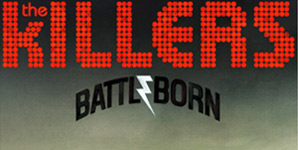 Battle Born is also an album that requires perseverance, it doesn't grab you on first inspection, but starts to reveal its more successful moments by your third or fourth listen. At first you're blinded by the familiar cinematic landscapes that Flowers paints, coupled with a nostalgic sense that you've heard something similar elsewhere. There's a problem with that though, it veers from homage into occasional imitation. So where the drums on 'Deadlines And Commitments' have more than a faint whiff of Kate Bush, or when the guitars on 'From Here On Out' really belong on an Eagles record, it's more than a little distracting. In its latter stages Flowers even channels Bono on 'Heart Of A Girl' (unsurprisingly co-written by long time U2 collaborator Daniel Lanois). The Canadian producer also contributes to Flowers' most compelling moment on the album as he makes an emotional plea during 'Be Still' ("Don't break character, you've got a lot of heart.").

But Flowers' lyrics don't always quite hit the mark, one such example is the crowd swaying anthem 'Here With Me'. He sings; "Don't want your picture on my cell phone, I want you here with me". But it all feels a little forced and engineered to pull on the heartstrings. It's also interesting to note that the co-writer of this particular track is none other than Travis' Fran Healy, who really should have been able to inject some subtlety into what is essentially a mid tempo ballad with strings. The unlikely Scot is just one of a number of co writers and producers that share credits here, and that again is part of the problem with Battle Born.

No fewer than five producers have contributions; all of them obviously try to make their own mark on the record. That means any sort of consistency is thrown out of the window. It feels like a greatest hits compilation, except one where you've never heard the songs before and where there's perhaps a little too much filler. Where the band seems to have recaptured the vitality they once had ('Runaways' 'A Matter Of Time', 'Battle Born') there's a glimmer of the promise they showed with their debut album. But that's balanced by the more mediocre material ('The Way It Was', 'Flesh And Bone'), which makes the album ultimately more forgettable than you'd like it to be.

The Killers have always had the ability to write songs that are spiritual successors to Springsteen's 'Born To Run'. They've been able to evoke movie poster images of an idealised American landscape (the album title itself is lifted from the flag of their home state Nevada). But at the fourth time of asking they still haven't delivered the quintessential American guitar record of the 21st century that you want them to. Battle Born suggests they could achieve the grandeur of other records that have emerged from the arid desert of the mid west (U2's Joshua Tree still holds the trademark for that one), however it looks like there's still some time to wait until Brandon Flowers sneaks that album out from the sleeve of his Vegas lounge suit.