Review of Push Over Boy Blues Single by TD Lind

TD Lind started out on the great British Pub circuit before a chance encounter catapulted him from Inspector Morse's backyard around New York, L.A, Kentucky, Texas and Paris before settling back in dear old blighty. Whilst on his travels Mr Lind has been the unfortunate incumbent as three consecutive record labels who took his signature ceased to be. He also holds the dubious honour of having had the 'privilege' to play support to both Ozzy Osbourne and James Blunt. A bad luck charm with poor taste or just someone who can't say no who's a tad prone to unfortunate coincidence? 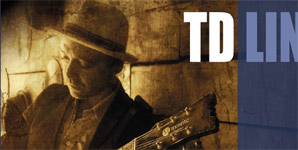 Lind has now signed to Dramatico Records (don't dump the shares just yet) after two albums, 'Let's Get Lost' and 'Call Me A Sinner' that he self released. 'Push Over Boy Blues' is the debut single from his new album for the label, 'The Outskirts Of Prosper'. If you're a fan of retrospective, backward glancing nostalgia brought up to date with a fresh perspective by someone with a decent voice and a knack of writing a new song in a traditional 'character' style then listen out. If you like your bass double and upright and your snare brushed and teased you'll like Push Over Boy Blues. Owing more to The Aristocats and Toy Story than to The Cotton Club or Ronnie Scott's Lind's song has gentle hint of jazz and a shimmer of Skiffle. (Not too much mind you, you fear he wouldn't want to ostracize the listener) Not surprisingly given his style or vocal Lind has been championed by the likes of Randy 'You've Got A Friend In Me' Newman as well as our own 'national treasure', Stephen "Simply in awe. It was as if Van Morrison, Bob Dylan, Johnny Lee Hooker, Chuck Berry, Mark Knopfler, Ry Cooder and God all got together .. wonderful." Fry.

In the way that Michael Buble, Jamie Cullum, and to a lesser extent Eli Reed, have cornered a market in accepted contemporary rehashes of bygone musical formulas Lind could yet see himself on next year's vote verification slot on Strictly. Loved by Mums and Grans everywhere.........(biography title anyone?)