Forever damned with the handle "The girl who sang on that really great chill out song" (The track in question being Destiny by Zero 7, from their Mercury-nominated debut album Simple Things), Sophie Barker's career since then has been something of a stop-start affair. 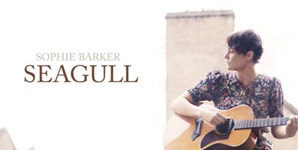 With the seveners on virtual hiatus, Seagull's lengthy gestation period - her previous album Earthbound was released way back in 2006 - tells its own story in terms of the struggle the singer had in finding both the right personnel and vibe to complete it. This search for the right ingredients was only successful when eventual band members Sam Johnson and Laurence Clack of Lucky Elephant were recruited, but now the singer is buzzing with excitement at its eventual emergence, proudly claiming "It's like serendipity calling and coming together through the most natural of sources."

She's also admitted that some of the songs had been kicking around as ideas since the Earthbound period, which goes some way to explaining why the tenderness and downbeat sentiments of that record can still be found in Seagull's darker places. The difference between the two is that whilst the former was in places stark to the point of melancholy, the Sophie Barker of 2011 seems to have cast off a good deal of baggage, and the broader musical perspective helps take the focus away from being solely on her gossamer, whisky-smooth voice.

Radical departures though these have not been, with opener Paradise Lost gently weaving through its country-tinged paces, as attractively downbeat as it's close compatriot Maybe. There are a couple of more diverse musical nuances - Bluebell is long on soulful horns and an uptempo vibe more akin to her old band mate Sia Furler, whilst Just For You employs some reluctant electronica - but chiefly it's business as usual, albeit with a smile missing from her earlier work.

In a sense this experimentation is the hallmark of someone sounding more comfortable in their own skin than ever before, and continuing down that path Insight even sees the singer trying her hand at what might loosely be termed the blues. But it's with no little irony that Seagull's best is in the dinner party ambience of Say Goodbye, on which it's easy with eyes closed to imagine that briefly we've slipped back a decade in time. The female singer/wongwriter field is about as packed as it gets, but if the likes of Rumer can make a splash with her erudite Karen Carpenter schtick, then Sophie Barker's best times may well yet be to come.