A giddily, unrepentantly tacky mock tudor mansion. A vast reception room, featureless except for a extravagant fountain, a handful of tastelessly positioned potted plants, and a marble staircase which winds its way into the heart of the building. The tiled floor has a black and white chessboard pattern, and the symmetry of the pattern is spoilt by trails of glass, puddles of wine and smears of cheese and caviar. A middle aged man lies sprawled against the rim of the fountain, wearing only a large white dressing gown. He holds a small glass of whiskey. His gaze listlessly wanders across the wreckage of yesterday's party, never stopping to focus on anything for too long. He looks sad and contemplative, as if the emptiness of his aimless existence worries him. This is what 'Black Dot, White Spider' sounds like. 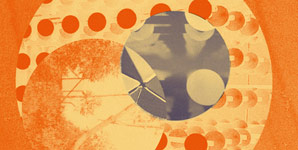 A propulsive krautrock rhythm drives the track along; a world-weary vocal subverts and plays with the momentum which this rhythm gives the song, stripping it of all sense of direction. "Foreign skies, your tired eyes", the singer softly moans, as if bored of life itself. Splashes of eighties-sounding synths add a touch of cheesy glamour; perhaps they weren't intended to, but at this point the eighties synth sound is inextricably linked with cheesiness in most people's minds. The impression the band's kraut-pop leaves is one of languorous decay and faded glamour. It's an interesting song without being an essential listen.

This EP features the original along with four different remixes. The best-known remixer, The Horrors' Tom Furse, contributes a reworking which achieves little besides making the band's debt to Neu! even more obvious. The other mixes fare better. Kelpe glitches things out, making the original beat jerk and flail about, a trick which leaves the song lurching around entertainingly. Ghostape drops the original vocal into the middle of a crowd of other voices - a baby cries, fragmented sections of the song's lyrics are repeated - an unsettling trick which is worth a listen. The track slowly swells to a loopy psychedelic climax faintly reminiscent of late-period Animal Collective. Cerceuil's effort rides crisp, clean and decisive drumbeats and gentle waves of feedback, taking the track in more overtly rockist direction. All three of these remixes succeed on their own terms, but none of them demand repeated re-listens. Whether you need to hear them will depend on your opinion of the original: if you consider it little more than a peculiar, briefly diverting curio, then nothing here will change your mind. For Seeland completists only.