Four minutes short of an hour is way too long for an album. But Georgia four-piece Reptar obviously think that 56 minutes is an appropriate time frame to showcase their bumbling funk, content grooves and more timid samples. However, the term 'background music' kicks in about 35 minutes through. 'Body Faucet' is buzzy with a breezy feel of experimentation, making them members of the Friendly Fires/Vampire Weekend/Foster The People club. But not fully-fledged members just yet. 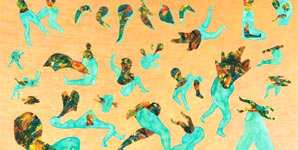 The limp plea of 'Please Don't Kill Me' is made less ridiculous with the brass section and tribal beat that will tempt a few dances to occur within a crowd. 'Orifice Origami' begins with the ultra deep repetition of one syllable, 'bo.' It sounds like some sort of homage to 70's glam rockers Mud and their Christmas hit 'Lonely This Christmas.' This noise channels its away through the verses, giving the track an unusual extension of the conventional drum beat. It ends with a minimalistic space-like atmosphere of vibration effects. 'Houseboat Babies' boasts a varied vocal and springing synth, a bit MGMT-ish.

'Sebastian' (whoever he is) oh hang on, bassist Ryan Engelberger explains on the band's website how 'Sebastian' is 'named after a saint who became a gay icon.' The track also has a plot about 'experiencing, then remembering, a sexual awakening with a close friend.' Well, that wouldn't have been the meaning that came to attention. The same goes for 'Ghost Bike' where it apparently, 'captures the space between witnessing a friend's death and surviving it.' Under the surface, there's more to this album. Engelberger believes, 'The record feels like a big dream with different chapters.' This does have some truth; the daydreams seem to trickle along from start to finish. With these tracks having a meaning, it makes the album have a bit more power. This makes up for some of the pointless sounds made and brings maturity to compensate for their childish namesake, Reptar.

A couple of tracks towards the end of the hour like, 'Water Runs' and 'Three Shining Suns' (ooh that rhymes) don't really give anything to the album. That's ten minutes that could've been knocked off the final count. This album is one big dream, but one that has gone on into a long lie in and consequently spiraled off in to many complicated tangents. There are some worthy songs amongst the mix but had it been refined it would have saved some mild boredom.