The general rule of thumb should always be to avoid re-issues when the word "Seminal" is dropped in to the accompanying PR blurb. Nine times out of the word is being misused, applied to an inferior piece of work which is either A) Just old or B) A facsimile of something far more diverting which does deserve the handle. 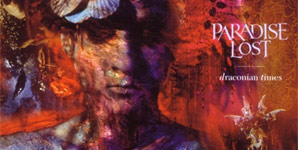 This re-issue of Paradise Lost's fifth album arrives complete with the s-word being bandied about, the justification being that it was something of marker for the gothic metal scene of the early nineties. Formed in Halifax at the end of the decade before, prior to the original release of Draconian Times the band's earlier work had been characterised by a far more deliberate and misery laden outlook, stretching the extreme metal format across numbers at an endless, dirge like tempo. As fun as all this sounds, releases like Lost Paradise and Gothic resulted in them being talked about in the same bracket as the likes of Celtic Frost, and despite the complete lack of mainstream interest, the fanaticism of metal fans kept hoodie sales in the black. (Sorry).

Now augmented with a Dolby Surround 5.1 makeover, a clutch of extra live tracks and a DVD, Draconian Times is ready to face the world again. The first impression is that despite some of the pretensions to the underground, this is by and large a straight rock record, opener Enchantment beginning on a delicate piano line and with singer Nick Holmes vocals far less guttural than at times previously. It's a big, grandiose song with a sense of majesty and pomp that fuelled mid-period Metallica, and illustrates the band's then newly expanded horizons. Following it, Hallowed Land straddles both grunge and goth in expert terms, whilst Forever Failure grinds attritonally accompanied by the kind of samples of which industrial shock troops Ministry were so fond of at the time.

For a band that formed at the peak of the thrash era, Draconian Times saw Paradise Lost continuing in mostly second gear, but those who like their mosh pits with a bit more spice will relish getting the chance to slug it out again to The Last Time and Once Solemn. Occasionally, as the pace slows and things get really gloomy - as on the creeping Shades of God, or the suitably titled closer Jaded - the appeal narrows however back down to one for the converted few.

So, as with all "Re-imagined" material, be it truly seminal or not, the first question to answer is what the extra stuff is like. Disappointingly, it feels under cooked, with a couple of perfunctory demos and a clutch of live tracks which will probably hold little attraction for most. This underwhelming attempt at repackaging only underlines the truth, which is that Draconian Times is already a worthy tablet from the era, and the whole
exercise seems at best like a misdirected attempt to connect with a different generation. Add to this the absence of the band's version of The Smiths Heaven Knows I'm Miserable Now and the lack of a copy of the accompanying DVD, and then you really get something to get depressed about.