Review of Happy In The Hollow Album by Toy

After ten years together, Toy are releasing their fourth full-length studio album. 'Happy In The Hollow' represents the band's first album for their new label Tough Love Records, and their first since 2016's 'Clear Shot'. The five-piece have written, recorded and produced their latest record in its entirety. Bassist and vocalist for the band Maxim Barron says of the eleven-track album, "We were starting from scratch and it felt very creative as a result. It's an album we feel deeply connected to." 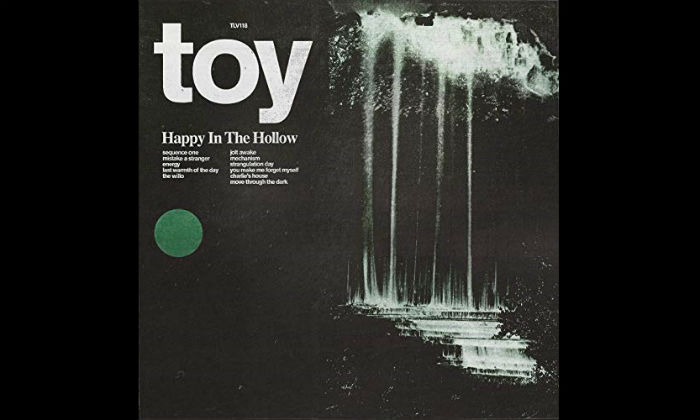 Although the band's sound has grown and audibly enjoys a greater freedom, Toy have still not lost the ability to concoct atmospheric soundscapes that cocoon you in a claustrophobic bubble. Each song envelopes the listener with a satisfying warmth tainted with an uncomfortable unease that you're never far from something a little more sinister. Musically 'Happy In The Hollow' expands on Toy's familiar sound to subtly shift and broaden their musical base.

The newest release and opening track lifted from 'Happy In The Hollow' is 'Sequence One'; a brooding electro-flavoured track fully loaded with a wrap-around sound of OMD like synth loops, building percussive menace and some deftly delivered guitar work. The unwavering, nearly monotone vocal works incredibly well sat on top as the track, "about running through a war zone of post-apocalyptic proportions with your significant other", unfolds brilliantly below. 'The Willo' has a vaguely psychedelic feel with its 60s keys and wispy, almost folksy, sensibility. There's a hint of The Doors and suggestion of The Coral as the organ scores the retro sound. 'Jolt Awake' has a great walking bass line with Duane Eddy-ish guitar licks to support the narrative vocal and spacey soundscape and there's even a reflective and dreamy instrumental towards the end of the album in 'Charlie's House'.

Where Toy's latest album shines brightest, however, is on two consecutive early tracks: 'Energy' and 'Last Warmth Of The Day'. The mellow and moody darkness of the latter is underpinned by some tremendously effective drumming from Charlie Salvidge, another great bass line and more inventive guitar as Tom's tender vocal softly sings through the very evocative track. 'Energy', aside from possibly 'Mechanism', is the most immediate track on the album and brings forth just that, an energy and buzz that effervesces throughout. The most pacey track of the eleven is a tightly bound package of contained frenzy. The percussion is driven as the bass rumbles and the  guitar squeals whilst all the time Tom Dougall manages to keep it all locked together with his perfectly measured vocal (I'm still not sure why, but this song puts me in mind of 'The First Big Weekend' by Arab Strap).

'Happy In The Hollow' represents a subtle but nonetheless significant change for Toy. The album is more open than much of their previous work and feels more accessible. There's still a darker undercurrent that sometimes presents itself and there's still that post-punk edge to the sound of the band but there's now too an easier, less restricted way in.