Often forgotten, woe betide the music fan who makes the error of underestimating the influence of the cerebral, acid jazzateers of the twentieth century. Whilst the likes of Miles Davis, Sun Ra and Herbie Hancock have been cast into the monochrome tableau of history, their progressive, boundary free approach to skat creativity still lives on in the margins, originally in the guise of mavericks such as Afrika Bambaata and George Clinton, but even now for instance in the form of Stephen "Flying Lotus" Ellison and his autodidact roster on the Brainfeeder label. 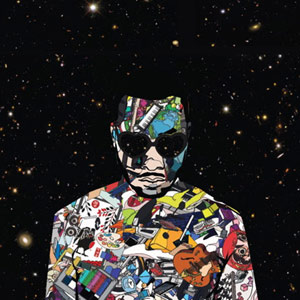 Seven Davis Jr.'s biography reads like a postcard home from that era, talking about how the producer "Entered this physical realm" in Texas more than thirty years ago, but more to the point it aptly describes the concoction of his music as "Future soul". His debut album, 'Universes', continues the astral theme in both title and tilt: with jokey spoken word cameos at the end and beginning, this is a release that for the most part is never more than a few notes away from not being too serious about itself.

It's also one primed for dance floors across the galaxy. In these light years the insistent breaks of 'Freedom' play out over a delicate, upbeat set of loops, whilst the vintage motifs of 'Everybody Too Cool' - Rhodes' whip tight snare and a raspy drawl of a vocal - possesses enough retro-kitsch chops to bring back fond memories of Outkast at their hippy/trippy oddballness. There's always a nagging voice at the back of the mind that this might be an attempted short cut to the record buyer's penchant for post-Winehouse sentimentality, but in reality Davis is too scattergun for that. He's also contrite: the Moog-squelches of 'No Worries' underpin a cautionary tale of his periods spent battling addiction and seizing the second chances which the strength of 'Universes' offers, whilst anyone doubting his sincerity will be suitably chastened by the heartfelt anti-violence sentiment of 'Fighters'.

It's not unusual for those in the grip of external influences to make contrary choices: Davis Jr. turned down major label offers in the past, staying on the sidelines and opting amongst other projects to ghost produce hip-hip tracks.  What puts that decision in stark relief is the sheer creative energy which 'Universes' throws off throughout, from the Flylo glitch and then rampant junglism of ten minute closer 'Welcome Back' to 'Be A Man''s subtle Afro-centric understatement. That he has the pulling power to get nom-du-jour Julio Bashmore to the party on 'Good Vibes' is only half the story, however, as the collaboration pulls off a furious, glitterball-busting disco rush: that it's shaded out by the impossibly funky house of 'Sunday Morning' as the album's best track is little short of a revelation.

It would be easy to try and draw an uncomfortable and necessary line between Davis Jr. and the pharmaceutical habits of many of those twentieth century iconoclasts from which the cosmic well of improvisation sprung. The plain fact, however, is that this is a man who clean and sober may well have produced one of the most eclectic dance albums of the year. Celestially out there? Yeah, but you won't need warp drive to reach it, just an open mind and a pair of headphones.