Review of Zirconium Meconium Album by Fever The Ghost

Having made quite an impression with their live shows and their first EP 'Crab In Honey', Los Angeles' Fever The Ghost are set to make waves with their ridiculously titled first full LP 'Zirconium Meconium'. It's hard to classify or pigeonhole Fever The Ghost as they take so many styles and genres in their stride, and as a result, this may well be the cleverest album of the year. 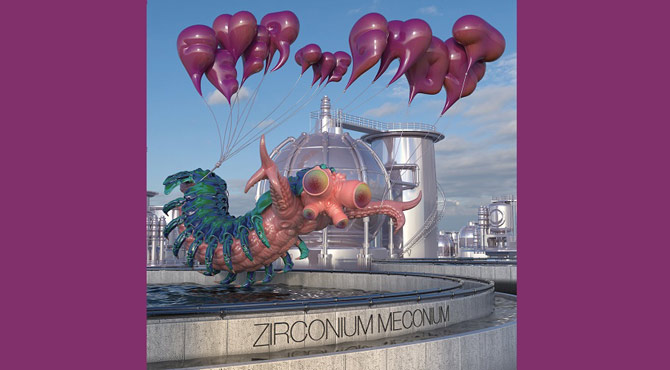 The album begins with 'Metempsychosis', a short, almost instrumental with hints of both Steely Dan and Sparks about it which slowly builds into the first song proper, 'Rounder II'. This is a vaguely proggy slice of futuristic space rock, like Led Zeppelin having a jam with The Flaming Lips, fronted by Jack White. There is layer upon layer of keyboard textures and vocals harmonies as well as a pretty wild guitar solo. Here is a band who quite clearly have more ideas in the space of thirty seconds than most will have over the course of an entire career.

Fever The Ghost aren't all about stompy space prog, however, as on '1518' the band take on a fairly contemporary pop sound which stops just short of being funky. Elsewhere, it's clear that the blue smarties were not in short supply as 'Surf's Up.Nevermind!' channels both The Fall and Sparks and 'Long Tall Stranger' goes completely all over the place a little bit like The Cardiacs, but mostly in a completely original way.

It doesn't always come off successfully on 'Zirconium Meconium', and sometimes Fever The Ghost just need to figure out when to stop adding sounds to the pot. The chorus of 'Hinterland' for example is a distracting whirl of synths that sounds like the keyboard monster turned up and puked all over the studio and there is a great deal of mucking about between songs with nonsense samples and digital beeps and boops that don't really add anything. In fact, the album's highlight, the loungey, blissful 'Peace Crimes' is almost ruined by some keyboard overkill in the choruses towards the end.

None of that should take away from the fact that, overall, 'Zirconium Meconium' is a pretty fantastic piece of work. All it needs is a little bit of polish and a more discerning hand at quality control and it would be perfect. This is a band to keep tabs on for the future.