Review of Cockfighters EP by Chavez 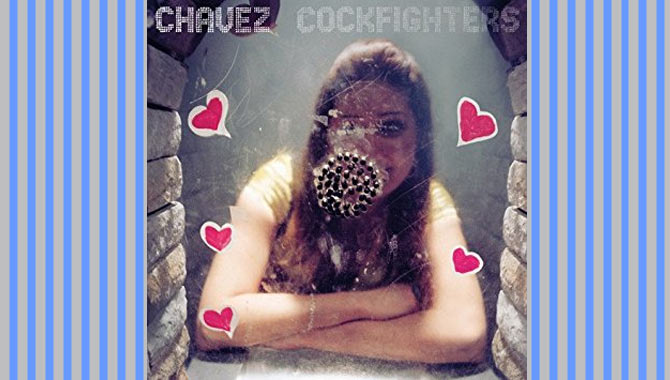 The recent past has seen a resurgence of well-loved, cult favorite bands, including The Zombies, Failure, and Slowdive. As part of that group, Chavez challenges the music business model which dictates 'an album and a tour every two years' by releasing material on its own timescale, when the group's members can devote precious time to the endeavor.

Staying true to the underground, Chavez's newest collection of songs borrows its title from a lesser-known 1962 novel by Charles Willeford. "Cockfighters" sports an honest, unadorned mix that has a demo quality - a stealthy underscore that this EP won't settle in with the average, supercrisp, digitally engineered crowd.

Guitarists Matt Sweeney and Clay Tarver delight in working left-of-center notes into their chords, and ear-tugging chord anomalies into their motives, verses, and choruses. Chavez continues to hit its highest peaks during those fleeting milliseconds. "The Bully Boys", the EP's 'lead single', features a looser, grunge-inspired feel, with aforementioned fleeting moments reflecting back to early 00s power pop. Vocals, performed by Sweeney, are wrapped neatly between layers of guitar, bass, and drums, which is unusual: most bands with a lyrical message like the vocals to be very upfront and clear. On "The Singer Lied", the vocal middle-of-the-mix approach subtly underlines that 'song' remains a platform for instrumental enjoyment, as well as a vehicle for lyric and prosody. Drummer James Lo and bassist Scott Marshall drive the band as its vital rhythm section. Chavez hits its most sublime moments instrumentally, like the hurried, anxious, almost military drumroll evolving into a jazz-inspired, brushy drum sound to welcome "Blank in the Blaze".

The ephemeral, approximately nine minute EP caters to a music-consuming public that finds value in 'the here and now' - quick consumption, quick assimilation, and artistic diversity. "Cockfighters" glides into a playlist home somewhere between indie rock, fusion, and post-rock. The succinct trio of tunes, living well at home on Matador, may sound indie prima facie - and that's deliberate. These men are master songwriters who know the value of dynamics, building, ebb, and flow. There's a formula here - all three songs end on a guitar note - but that common thread is as arcane and mysterious as the origins of the songs themselves. As it should be.

Ranging from genuine vintage, 1997-penned "Blank in the Blaze", to 2002's brave new world encapsulation "The Bully Boys", to the newest tune, desert rock infused opener "The Singer Lied", "Cockfighters" effortlessly both skips and spans decades. Time may have passed during the bandmembers' successful pursuit of other endeavors, but that same time has not eroded the band's punch or drive.

On the music-biz irreverent "Cockfighters", Chavez honors its past as well as its present, proving that the artistic statement it made continues to be vital and fresh today. Fans who enjoyed the first two releases will relish this brief new resurgence. The band has a sense of what its chosen niche needs - less music by the numbers, more subtle ear twisters. Music that isn't so 'out there' as to be inaccessible, but idiosyncratic enough to attract a new crop of listeners to its already solid, albeit sparse, oeuvre.