Also known as Eric Berglund, one half of Swedish pop duo The Tough Alliance, ceo have released this, their debut album, on the Modular label. With a hugely ambiguous website and a reputation for not being one for interviews, Berglund seems very much one to let the music do the talking. 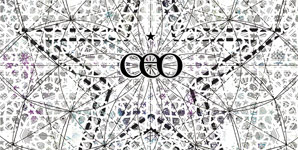 Acting as a grand opening 'All Around' sets the tone of 80's pop based around synthesised strings. The tone continues through 'Illuminata', an orchestral piece with a strong retro production, while a dance influence exudes from 'Love And Do What You Will' before an acoustic melody serves only to mess up the track. Berglund comes back in some style though, with the beautiful 'White Magic', a classy pop piece that is undeniably sweeping and can only be faulted for its sub-three minute duration. Nearly as good is 'Oh God, Oh Dear', which despite some effects that sound like an old Nintendo game is great fun. This duo is very much the peak of the running order and the other side sees a decline of standard, ending with the carol-like 'Den Blostertid Nu Kommer'. It concludes a record that is very much hit-and-miss, equal in highlights and lowlights.