Review of Your Four Limbs Single by Kurran and the Wolfnotes

This British five-piece has only recently assembled and already they look like a band worth watching out for. Still busy producing their debut album, their recent double-side single, is only their second. With what looks to be a year where folk/alternative is dominating, Kurran and the Wolfnotes are bound to have a howler of a victory.

Kurran and the Wolfnotes claim that a major recent influence of theirs has been Bombay Bicycle Club. This is evident as they propel folk traditions into a Nu-Folk British sound. Your Four Limbs is a dark and haunting track that comes across very bittersweet. It's a great track that combines it's quite tragic message with an uplifting melody. Only one listen and you'll be caught by its hook. Whilst adhering to folk ties, it is definitely evident that is not a song stuck in the past. Yes, it may even have a dark resembling to Johnny Cash's music, but the heavy drums and bass ensures that through its production, this track has had a modern stamp of approval. Your Four Limbs deserves to be a hit because it is obscure in its evocative, and quite disturbing, theme and hopefully it will be successful 'in the blink of an eye', as their lyrics suggest.

The B-side track Hit the Bottle reveals another side to this eclectic band. Hit the Bottle resembles a José González track, and again we encounter a melancholic track filled with loss and regret. There are more obvious folk undertones in this track with use of acoustic guitar and the harmonica. Therefore, this track, compared to Your Four Limbs, tends to verge more on the traditional, but this certainly does not hinder the track. Lead vocals, provided by Kurran himself, give the song depth and a quite-strange wisdom in the lyrics reveals an unexpected profundity. This song works very well counterbalanced with the much faster-paced Your Four Limbs.

Collectively, this single is a brilliant outing from this band. Yet to release their debut album and set to unveil new tracks on their UK tour in September, this definitely is a band worth looking out for. It is shocking that a label is yet to sign these guys because they are creating some great music. They may seem to be doing what a lot of bands are starting to do, which is jump on a folk bandwagon, but Kurran and the Wolfnotes are doing something entirely different. By placing their unique slant upon a tradition and making their music appeal to today's generation; they are a pack of wolves that are proving their bark is definitely worse than their bite. 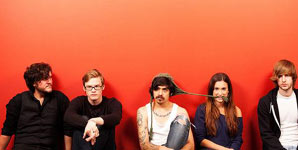