18 year-old Jake Bugg releases his debut later this month, a name and album that has been surf ahoy on the hype waves for a good six months. An abundance of young male singers have forced themselves upon our metaphorical doorsteps over the past couple of years. While Bieber, Maynard and Sheeran may have won chart success and hearts at an early age, their fans make them in to some sort of untouchable mirages as they've been swept into the chart's turbulent clutches. 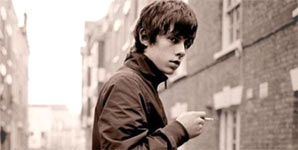 But Jake Bugg stands miles apart from these acts. Everything feels real and simplistic with no ridiculous over-production. His musical demeanor sounds like it's fresh out of a time machine. His voice encompasses a tone that inhabits itself somewhere between an array of musical geniuses from yesteryear like Bob Dylan and The Beatles. As at the same time boasting something semi-modern like the Gallaghers, Miles Kane and the Arctic Monkeys. An intriguing situation that allows an album to have authentic guitar parts, tremendously organic and crackly tones that sit comfortably.

As you listen to the record it becomes clear that boy wonder Jake Bugg is still a normal human being. With songs about sticking 'Two Fingers' up to yesterday and thoughts of leaving the 'Trouble Town', teenage angst smashes it's way through. Towards the end, a sensitive side seems to escape Bugg. With lyrics like 'Someone hold me, I'm done with this game' and 'I want to go someplace and find you there,' proving how he is a typical bewildered adolescent.

'Broken' is the longest song being just over four minutes, the record a fast moving speed chase, eventually cramming in a 14-track scramble. Singles 'Lightning Bolt' and 'Taste It' have an upbeat craving that grab your attention. 'Seen It All' has a 'big' chorus fails to inflate into a sturdy structure.

The quieter songs elevate Bugg into a different perception. Folk elements conjure with tinkling strings and tender vocals take their place for 'Country Song' and 'Simple As This. ' At less than two minutes, 'Fire' may be misrepresented as an angry burst (or a very brief Kasabian cover) but its actually sounds like something from the war. Fond words, 'Girl, baby girl won't you come back home to me', are mounted on the fizzing sound of an old record player. The ironic thing is that this track was recorded on his Iphone.

Jake Bugg may or may not be the saviour of music but either way, creating a record reminiscent of such timeless icons with originality, means it deserves to be up there among this year's best.