Idiot Glee's name suggest either blatant stupidity or an ironic take on what you could now describe as a phenomenon, the TV show Glee if you didn't get that, but these are assumptions that call for the inane statement about why you shouldn't make assumptions. For when you listen to Paddywhack, even in the opening chords of 'If' you realise this is the sound of slow burning youthful emotion; with a side of soul. 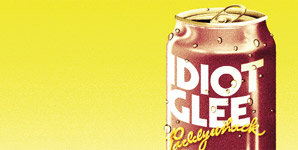 Hailing from Lexington, Kentucky, Idiot Glee or James Friley packs his pop songs full of southern hospitality as he oo's his way to the next dreamy chorus. His falsetto vocal harmonies and tossed and turned in moments of gripping baritone beauty offset with bass lines that only a jazz cat could rock. The final moments of 'All Packed Up' submerge into a double-time frenzy that is still slower than most tracks you'll hear that aren't ballads.

As Paddywhack progresses it's easy to find yourself wondering when you put Fleet Foxes on, but this album benefits repeated listening as you pick up on something new each time and a comparison with Fleet Foxes isn't the worst thing that could happen to an young artist. It's his precision and old soul antics that draw this comparison, yet this is more modern than you might think. 'Deep Descent' is a two minute interlude with off key synths and disturbing drum tones that only a train could mimic. It's the track that has the least bragging rights here to being a 'song' and yet it's easily one of the best.

Pop is tricky business and gets a bad rap, but this is pop music in its truest form. Idiot Glee isn't just a story teller, but a teller of truths, about love, life, loss, and loneliness; you can hear the sincerity in his voice, he hasn't made this up, this has happened to him and even if it hasn't you believe that is has which makes this pop pure. Friley's lyrics are lethargically delivered through a throat of honey: "I was waiting, feeling, maybe even finding all I need; this will be the only time that I can tie my shoes on right. I found all I looked for, there are days when I can see my thoughts are all evil," he's a one man barbershop quartet. 'Let's Get Down Together' sounds like it's about to morph into 'My Girl' at any moment, 'I Want The Night To Stay' is classic Doo-Wop and these songs are all the better for a little injection of spirit.

After listening to this record a number of times you come to the conclusion that James Friley probably isn't an idiot and doesn't have that much glee either, but you also understand that this is the perfect moniker for an intellectually self-aware pessimist. Paddywhack won't be your favourite record of the year and that's perfectly understandable, but if you want to kick-back with a blast from the past then this is perfect for you and it deserves your attention simply for the emotional resonance, and the piano medley on the end of 'In The Sadist's Garden' is worth the wait.