Review of The Droner EP by Holy Coves

Holyhead grunge rockers Holy Coves burst onto the rock scene in February 2011 with their debut EP, entitled The Droner - an EP that Holy Coves themselves claim is "a debut album to fill city stadiums". There's no denying that the Welsh grungers have ambition, from the quality it's plain to see that they have poured their hearts and souls into releasing this album, and there is no doubt that they've unleashed a force to be reckoned with. The sound they have come up with totally belies their Holyhead background, the album is filled with confidence and energy, and it seems that Holy Coves have come together with an idea of exactly how they want to sound, and have just written songs that reflect this idea, no questions asked. It sounds like four musicians, with a clear idea of the kind of music they want to make, making it. From first listen, the first impressions are that this is quite something. 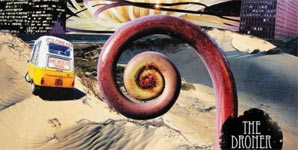 It has an air of a salute back to the days of "the golden age of grunge", the influences of Pearl Jam, Soundgarden, The Smashing Pumpkins, among others, are very prominent. The other influences that are strikingly obvious throughout the album are that of some modern day bands. I was reminded forcefully of some aspects of A Place to Bury Strangers and Queens of the Stone Age. Their sound has a definite "groove" to it; it's a head-boppingly alive compilation, definitely not unpleasant to listen to.

I also found it interesting how the names of the songs reflect how they sound. Let's Go explodes in with a clear, opening sound that properly introduces the band and what they are about. Come Alive re-energises the album after the slower, more melancholy sound of What's Happened to You has Happened to Me and brings it back to life, and Droner is both about a person who Holy Coves call a "droner" and it also sounds quite monotone and, to overuse the word, 'droney'.

However, on the other hand it is still a bold claim to say that this is a "debut album to fill city stadiums". I'm not sure whether the songs are 'big' enough for that quite yet. These songs should be played in a smaller, more intimate venues, and if Holy Coves plan on writing more songs in a similar vein to this, then they may want to consider playing to this idea of intimacy with their fans. Their fan base may also be restricted as the sound of the vocals may be an acquired taste, due to their grunge influence, and some listeners might not find that the songs varied or interesting enough, if they are not into this sort of music.

Overall, The Droner EP is a well mixed, well rounded throwback to the era of grunge, with some more modern influences put into the pot, to create a pleasing audio experience, if a little bit genre-specific and aimed a little bit too much at a total target audience. If these genres appeal to you, then I would recommend this band in a heartbeat.