As our hopes of an early spring are dashed by the news of impending snowstorms and similarly appalling weather conditions on the horizon, remember that there's always the cordial prospect of a summery soundtrack to accompany it at least. Hailing from the Sunshine State capital Tallahassee, Holiday Shores bring their own take on the experimental side of indie pop. 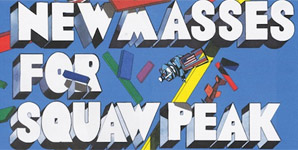 On the group's sophomore album New Masses For Squaw Peak, there is a healthy mix of influence from the highlights of last decades indie pop catalogue and a synthy Eno-esque sound. Album opener 'Airglow' exemplifies this well, the asymmetric keyboard pattern conjures up recollections of the more upbeat side of a Berlin-era Bowie sound, whilst the hushed drums and echoing vocals from front man Nathan Pemberton fits in with the lo-fi aesthetic of the band. The album goes back and forth between synth-infused beach pop and ambient electronica, never relying on a singular musical avenue. This very much works to the album's strengths given that whilst few of the songs are particularly memorable, they maintain a sense of creativity nonetheless.

The album title is split into two tracks, first 'Squaw Peak' and then 'New Masses', two ominous instrumentals emphasized particularly by the lonesome guitar plucks and accompanying reverberation. Squaw Peak itself is the former name of Piestewa Peak, the second highest peak in the Phoenix Mountains and third highest in the city of Phoenix (thank you Wikipedia). These two tracks in particular sum up the forlorn feeling of mountainous solitude coupled with the awe of natural beauty bestowed on the peak. Trying not to recollect Mastodon's Blood Mountain too much, the album is presented somewhat as a venture to the peak of a mountain; the album opener expressing the summery joy of pre-excursion, the mid-section displaying the melancholy and treachery of the ascendancy, finally ending with the jubilation of album closer 'Shadie Spun Gold.' The roughened Bossa Nova guitar and pert panpipes combine for an entertaining ending to a middle-of-the-road LP.

As a band, Holiday Shores are known for their experimentation and fidgeting stylistic choices, the crooning of Pemberton being the only constant in the band's sound. Caught somewhere between the Flaming Lips and Real Estate, New Masses For Squaw Peak is distinguishable among its indie pop contemporaries but seem nowhere near as out there as they want to be. Future releases from the group should be met with excitement; the trial and error approach the group seems to be using for their sound should eventually come off to something truly impressive and may even resemble the mountain of sound they are climbing in this album.