When asked to name 3D platform games most people would name Mario. Then possibly Ratchet and Clank or Jak and Daxter, maybe a few might even mention Crash Bandicoot. A name that probably won't get raised is Sly Cooper, the swift and cunning racoon, whose beautiful cel-shaded adventures illuminated the PS2 with a combination of taut controls, varied gameplay and entertaining stories. The relative obscurity of the Sly games is a real pity but along with rumours of a Sly 4 on the horizon, Sony has rereleased all three of the PS2 games with enhanced visuals, new mini games and all on one disc. But does the old school charm of Sly's cartoon capers carry well on to a next-gen console dominated by slick shooters and action titles? 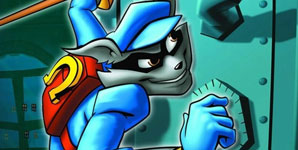 First and foremost I feel I should mention that I've been a fan of platform games ever since I remember. Out of the multitudinous genres available in video gaming, I have always had a soft spot for running around cartoon worlds jumping on enemies heads and collecting gold shiny objects. Having previously played the Sly games on the PS2 therefore I was over the moon to get the opportunity to enjoy them in glorious high definition, and glorious really is the word. The updated visuals look crisper, clearer and brighter than ever before. This is helped along by the fact that the originals had such great art direction in the first place, containing colourful characters and environments that all shared a strong sense of style. The visuals are consistent over the three titles yet each manages to feel different thanks to the differing gameplay elements they contain.

The first title, 'Sly Racoon', is the most basic of the trilogy in that it keeps to a largely straight forward and traditional platforming format, concerning the eponymous Sly attempting to retrieve missing pages from a precious heirloom manuscript. Although simpler than the other two titles, 'Sly Racoon' nevertheless manages to be both fun and engaging thanks to its accessible controls and beautifully designed, dare-devil exploits. The second title, and my favourite, 'Sly 2: Band of Thieves' is a much more diverse beast. As well as incorporating larger and more open levels and a stronger plot complete with well-acted cut scenes, Sly 2 introduces segments where the player is tasked with controlling Bentley and Murray, Sly's partners in crime. Each has their own unique style, much separate from Sly's stealthy approach, allowing a greater diversity in gameplay and a rounder and more satisfying experience. The third, 'Sly 3: Honour Among Thieves' is more of the same idea, upping the ante with aerial dog-fighting sections and even more of the charming characters that made Sly 2 so good.

Each adventure contains up to 10 hours of serious gameplay, and although they are not perfect (some camera issues and some sections are way too easy) it's hard to think of a bad thing to say about this collection. The voice acting, although superb is very much of an American cartoony style, which some may find grates after a while, and the music occasionally leaves something to be desired, but touches such as the cartoony 'sneak' noises that are made when Sly is scurrying to avoid being seen and the witty design of some of the characters makes up for these short comings.

Despite the current trend for high octane shooters and graphically stunning racing and action titles, there is still a lot of life left in the humble 3D platformer. Standing up well in their own right, each adventure remains playable and fun, and even better value when bundled together on one disc. For those who missed Sly the first time round, The Sly Trilogy offers a fantastic introduction to the PlayStation's sneakiest racoon. And, if you did catch the games back on the PS2, then this gives you a brilliant excuse to jump back into them, enjoy the updated visuals, and get all excited about the prospect of Sly 4. I can't wait.