By Andrew Lockwood in Music Reviews on 30 December 2020

Four Tet, aka Kieran Hebden, has been a busy boy this year, he's already released a 16 track album, Sixteen Oceans, as well as the 4T Recordings EP and Baby single. Earlier in the year Hebden teamed up with Thom York and Burial to collaborate on the singles Her Revolution and His Rope and he's already got work planned in the pipeline with Madlib for Sound Ancestors. As if that were not enough for one year Kieran decided to drop not one but two new albums simultaneously on Christmas Day.

The new Four Tet albums are titled Parallel and 871. Both are over an hour long and both are equally unique. Parallel is a ten track sonic exploration that starts with an epic 26m46s track, Parallel 1. The quite magnificent audible beauty that Kieran Hebden has created is something to behold. Hebden takes you through gentle undulations and delicately shifting patterns, subtly changing the direction and rhythm with a deft, gossamer touch.

Kieran Hebden, AKA Four Tet, has spent the last two decades delivering some of the most blissful and smooth tunes in electronic music. Across records such as 'Rounds', 'There Is Love In You' and most recently 2017's 'New Energy', the London producer has injected his sound with the prettiest melodies, firm grooves and a transcendent sense of zen. This all often comes together in his music to offer an overall mystically peaceful, yet grounded and danceable atmosphere, so you can both relax and bop to it. He hits London's Alexandra Palace for a one-of-a-kind show.

Even before Four Tet starts, it's a very unique set-up to this show. There's a platform with Four Tet's gear in the middle of the huge, cathedral-like Alexandra Palace, surrounded by lots of dangling bulb lights. An hour or two before Four Tet even starts people are huddled amongst the hanging lights, that are dull for now, no doubt to make sure they're close but also with much glee and curiosity of what said lights will bring.

When it does get to the show, Four Tet kicks things off with the throbbing but wistful 'Planet' to much bopping. The way this track marries pulsing clicks and eastern sitar noodling creates an atmosphere that's both club-like and spiritual. The lights begin to go into all kinds of sequences from an overall field of multiple colours to patterns that are like a swarm of rainbow, dazzling bees. He plays much from 'New Energy', with tracks like 'Two Thousand And Seventeen' continuing the ethereal-rave vibes.

Chemical Brothers Above And Beyond Four Tet

As the last bank holiday weekend of the summer approaches, most passionate electronic aficionados get ready for the influx of world-class disc jockeys that land in London for the two-day festival that is SW4. And for those who lack the erudition of the festival, it is further reason for you to keep on reading.

Fundamentally bringing some of the biggest acts from Ibiza to Clapham Common for two days may seem like a surreal notion, however, with every year, the festival in SW4 (the post code of the festival) gets more augmented, and this year is no different. 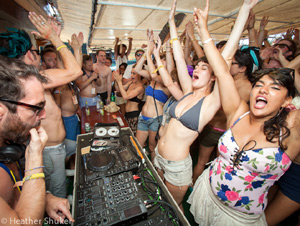