American musician and songwriter Esperanza Spalding releases her fourth studio album on Heads Up International. Having been schooled in jazz in some of the best learning establishments in America, Esperanza showed noticeable talent and has developed a style influenced by many Brazilian styles. Her performances show a unique situation as a female upright bass player/singer. Gil Goldstein was brought in to co-produce 'Radio Music Society' offering further support to this innovative jazz musician. 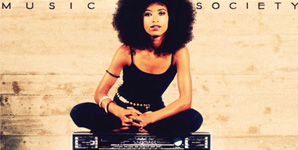 On first listening, two things certainly struck me about 'Radio Music Society'; the first was her beautiful, tone pitched voice that oozed purity and sophistication, with definite crossover sensibility. Her array of dazzling vocals certainly struck a chord with my virtuoso self. This was complemented by sophisticated musical arrangements that, however, sometimes border on 'quirky' in some parts of the album. Although the attention to layers and jazz chic, mixed with female sensitivity and purist integrity propelled me to be charmed by 'Radio Music Society'.

There's a mix of tracks, some soft like 'Cinnamon Tree' and a few upbeat possible singles like 'Endangered Species', together the songs all delicately form and mix together in an attractive way. There are aspects of honesty and lyrical playfulness, combined with confident musical orchestration to create, all in all, a quite delightful album.

There's no denying Esperanza Spalding has created a charming fourth album with 'Radio Music Society'. It has grace and musical integrity, although does demonstrate a certain over indulgence in places, but hey that's jazz! This is a 'muso' album that would appeal to a sophisticated listener. Spalding's voice certainly allows commercial appeal and she is showing direction and experimenting with jazz that could win over some listeners.