Review of Pie In The Sky Album by Eliza Newman

If your love of the Ukulele has been thwarted by seeing George Formby, marginalised by Ukulele Orchestra or perverted by Sabrina's cousin Shelley, a.k.a 'Dead Tooth', delivering ditties between her day care duties at her canine and kid creche (Raising Hope) then fear not. Eliza Newman may possess a quirky under belly that can match that of Kimya Dawson or Jonathan Richman but her accomplished second album is testament to the fact that she has more than one string to her bow. The opera trained, unwitting Al-Jazera foreign language correspondent (Can you say Eyjafjallajokull?) and former Bellatrix and Scandinavia band member has a taken a more relaxed approach for her sophomore solo album. "Empire Fall was more minimalist and had a darker undertone."

'Pie In The Sky', Eliza's latest full length release, showcases her multiple talents very well. Having learnt violin and piano from an early age, singing and the guitar coming later, she is able to combine both classical structure and composition with wry, anecdotal left-field pop in a marvellously liberating way. Having "Calmed down quite a bit", Eliza's sortie into the world of Heavy Rock over for the immediate future, she now says "My music is more relaxed............Its beyond words, like touching heaven with your inner ear!" 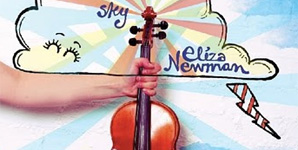 One of Iceland's most popular songs of 2009 heads up the ten track set. 'Ukulele Song For You' is a gentle introduction to the charismatic vocals of Ms Newman. The delicate percussion and occasional wondrous sound bursts sit behind Eliza's voice as she begins to enthral you with her classically trained voice box. 'Awakening' treats the listener to a more dreamy soundscape with lightly echoed vocals that float over minimal instrumentation. There is an ever so slight oriental infusion to the track and traces of Julee Cruise can be heard throughout. 'Bloom Again' skips the beat back up tempo before the title track encapsulates some of the albums major themes of Love, hope, mental torment, new beginnings, wishing, wondering and ultimatums....

At track 6 the 'Pie In The Sky' begins to feel and sound a little different. There is a more confident air to the tracks, the beats and percussive treatments are heavier and Eliza no longer appears as timid or fragile as she does in some of the earlier numbers. Bouncing into 'Star Wars Bar' (Before I listened I must confess to reading the track listing and thinking, is this song about a new line in confectionary?) Eliza's voice goes a little Claudia Brucken as the guitars lead the way backed by violin and drums. Her relationship frustrations are lived out in 'Jumping Through Hoops' as she once again displays just what a beautiful voice of crystal clear clarity and chacter she has. The stark piano lead 'In The Beginning' shows a darker side to a generally optimist set before the cynical 'I Wonder' and the marvellous closer 'Meet You There'. As if trying to combine all that's gone before in a 'best of' Pie In The Sky in 3mins 51secs Eliza ups the beat, drives the song to build and layer and throws in some great touches not least of which is the looping synth sequencer. The celebratory ode to love is a fitting finale on which to end.

Eliza Newman may sing that she's a hopeless case, a lost cause of potential wasted and that expectations long gone but in reality Pie In The Sky shows us what a fabulous talent she is and that far from wallowing in life's misery we should embrace hope. Pie In The Sky sure beats reality,

Eliza Newman - Pie In The Sky