Review of Blow Your Head Album by Diplo

Globe trotting DJ, producer, and dance music minor celebrity Diplo has taken it upon himself to introduce an international audience to the dark, tense, bass-fixated British dance genre known as dubstep. He's the man responsible for Blow Your Head, a distinctly patchy compilation which may well succeed in winning the scene some new fans, but doesn't offer much that will excite existing ones. 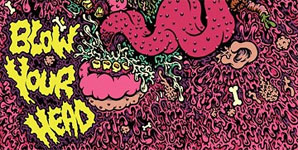 There are some impressive dubstep compilations already on the market. 5: 5 Years Of Hyperdub is a great introduction some of the scene's biggest talents, and Scientist Launches Dubstep Into Outer Space collects a number of excellent recent tracks. Blow Your Head is nowhere near as essential. It leans heavily on the more accessible and less outre end of the genre; this is not a problem in itself, but the choice of artists and tracks is a little bewildering. Diplo himself contributes two tracks, 'U Don't Like Me' and (as Major Lazer) 'Hold The Line', which are remixed by Datsik and Skream respectively. Both are middling by-numbers efforts. He also includes a lightweight dubstep remix of 'Burn', by American Idol winner Jessica Mauboy, which is precisely as bad as it sounds, and two efforts by mediocre chancer Rusko.

Never mind who appears the album though, just consider who doesn't: Burial, Kode9, King Midas Sound, Joy Orbison, Mount Kimbie, Pinch, Guido...most of the scene's most impressive creative forces are nowhere to be seen. The most notable exceptions are James Blake, who contributes the disorientating, stop start, synth based 'Sparing The Horse' as well as a choked up remix of Untold's 'Stop What You're Doing', and Joker, whose lush purple keyboard sound dominates the Ginz collaboration 'Re-Up'. The majority of the music on Blow Your Head, however, is produced by second tier talents. As a result, it's hardly a compilation of the scene's best moments.

Blow Your Head can also sound oddly dated. The likes of Benga and Rusko specialise in a visceral, straightforward form of dubstep which the genre has moved beyond in recent years. At a time when the sound is being pushed in all sorts of interesting directions, the emphasis on their by-the-numbers bass bangers marks Diplo out as a dubstep dilettante. It's a little like introducing 'Baby One More Time' as the hot new American pop sound. Blow Your Head may encourage somebody who is entirely new to dubstep to investigate better tunes, but they would be better off starting with the Hyperdub and Scientist compilations.