Back in 1995 The New York Times described R.E.M.'s album Monster as a "Big, dumb, rock record. Except it's not dumb at all". It's a description that could equally be used for Chuck Prophet's 12th solo outing Temple Beautiful. Both albums share a loud brash veneer of guitar riffs and throw away lyrics that hide a surprisingly considered and detailed set of character studies. Prophet's record is at times compelling, funny and heartfelt. That's a recipe that many artists fail to balance properly, but as Chuck is writing about his beloved San Francisco here, it's no surprise that he nails it without missing a step. 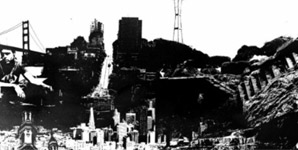 There are also very few other songwriters that could get away with singing a line like; "Meanwhile Bugs and Daffy Duck were hitching up the coast", without it feeling steeped in parody. Yet Chuck manages to as he weaves it into a Dylanesque web of notable cameos during 'Willie Mays Is Up At Bat'. Elsewhere the title track features a chorus line ("She got so excited, Manchester United") that on first inspection looks like appallingly bad couplet. Yet in the context of the song's euphoric and celebratory lyrics it strangely makes sense.

Questionable cultural touchstones aside though, Chuck manages in the space of 12 songs to paint a convincing portrait of the city he calls home. From moments in San Francisco's history ('Emperor Norton In The Last Year Of His Life (1880)') to its modern day incarnation ('Castro Halloween'), Chuck populates the city with quirky people and situations. Thematically Temple Beautiful is essentially a concept album, but it doesn't struggle with any experiemental frills that weigh down many albums that are also given that tag.

Musically he's not adverse to the odd joke either. Perhaps it's only me, but the handclaps aren't without irony during 'The Left Hand and The Right Hand'. For the most part Chuck's accomplished guitar playing is at the centre of his compositions. He's happy to throw in a big solo or riff and some of the songs are what could be termed as anthemic, but there's an added depth as he pays subtle homage to the diverse musical lanscape of the city too.

The emotional centre of the album is actually the quietest moment to be found here. 'Museum Of Broken Hearts' does exactly what it says on the tin as strings and guitars work in harmony behind Chuck's anguished vocal. It's a song seemingly written from a very personal perspective, but the sentiment could be shared by any of the characters that Prophet has scattered throughout the album. It's that tapestry that makes Temple Beautiful a much more rewarding album that it may at first seem. It's like a novel with an neverending cast that you're happy to rediscover each time you visit.