The problem with Chris Brown - and we all know that there is a problem with Chris Brown - is not simply that we know he has a penchant for violence and was sentenced for assaulting his former girlfriend, Rihanna. What's 'almost' worse, is that he continues, with staggering belligerence, to forge himself the kind of persona, as a recording artist that requires the music-buying public to accept the notion that women were put on this planet to admire him and act as his servile orgasm monkeys.

The more naïve amongst us might have expected some degree of humility from Chris Brown's latest album, 'Fortune.' Maybe just an incey-wincey little apology? Some sign of regret or remorse? Just a few minor lyrical nods that might suggest some kind of personality shift? That way, disappointment lies, of course, because Chris Brown's lyrical content is every bit as self-aggrandising and stomach-churning-ly arrogant as ever. In fact, unless you were hoping to see last night's dinner again, I would heartily recommend skipping over '2012,' the track in which Chris Brown forgot to turn the microphone off whilst he explains, in horrifying detail, exactly what he'd like to do to some poor girl in the bedroom. "I'll get a pillow for your knees," he offers, generously, fooling the world's lobotomised women that entering a bedroom with Chris Brown is, in any way a good idea. Take my advice, ladies, there's only one place for that pillow, and it's not under your knees. 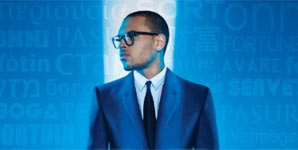 In some ways, you need to feel a little bit sorry for Chris Brown; he's obviously not the brightest spark in the box and on 'Bassline,' he demonstrates why. "Girls like my bassline," he repeats, endlessly throughout the track. A robot voice joins in - one of his robot mates wanting to get a leg-up in the industry from a collaboration, no doubt. They've got it all wrong though. Girls don't like you for your basslines, Chris. They like you for the muscle-definition on your stomach and that sh*t-eating grin of yours. They tell you that they like your basslines because they want you to think that they are interested in your production techniques. Don't be fooled, Chris!

The sympathy that you may feel for Mr. Brown will soon die out though, as you realise that listening to 'Fortune' is the equivalent to listening to a teenage boy telling his schoolmates what he got up to with the girl in the year below, last night and, most likely, lying about it. Elsewhere, Brown displays grotesque levels of the kind of cocksure attitude that makes him such a terribly unappealing character. "Don't judge me" he croons, on 'Don't Judge Me.' But don't worry, he totally understands that you simply can't bear the thought of someone else getting their manicured digits on his six-pack! He understands that! And he won't judge you either! That's mighty big of you, Mr. Brown. I'll remember that next time I'm thinking of punching a girl in the face.

Further displays of his deeply spiritual connection to the female race are evident on 'Stuck on Stupid,' where he reveals the lengths that he would go to for the one he loves by singing "if you told me to go rock climbing, to prove my love. I'd die trying." Really? Rock climbing? Not, I dunno. jumping out of a plane? Crossing the ocean? Walking over hot coals? Has the world of R&B simply run out of clichés for this one, Chris? Because, seriously, they give you a harness when you go rock climbing. It's highly unlikely that you would die.

Brown manages to come up with one track out of thirteen, on this thankfully-short album that is actually agreeable. It's the last track on the album and it's an auto-tuned Euro dance monster. It's called 'Don't Wake Me Up.'