When an artist appears on the X Factor and fails to make it through to the last few stages, chances are you've had your first and last glimpse at them. For Willis Earl Beal however this couldn't be further from the truth. His interview for the 'boot camp' segment of the show is currently doing it rounds on the web and it is one that is both hilarious and summative of his in your face attitude toward the Simon Cowell corporate media empire. 'What does it feel like to be here on the eve of this once in a lifetime opportunity' he is ask, his reply; "I want some Del Tacos" is the much needed middle finger that Beal is persistently holding up to modern day convention. 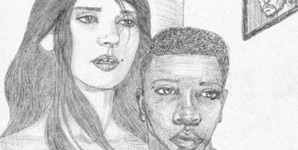 Acousmatic Sorcery is undeniably lo-fi, rife with feedback and supplemented by a modest milieu, it comes across as a re-recording of a Daniel Johnston release, with Beal's soulful vocals replacing Johnston's whispery voice. Album opener, the instrumental 'Nepenenoyka,' immediately evokes a recollection of some Johnston's catalogue. The same irregular chimes return on 'Bright Copper Noon' this time with Beal's own whispery utterances, eventually turning into distorted howls. In a recent interview with Pitchfork, Beal admitted; "I want to be like the black Tom Waits" - his erratic style and husky baritone are but two indicators that his is following through with this ambition. He never sticks to the bluesy template that has been laid down for him, nor does his voice maintain the soulfulness that he has been assigned by most media outlets.

'Take Me Away' comes somewhere between Tom Waits and Captain Beefheart, the mechanic thud of the drums accompanying Beal's almost gospel howls and grunts epitomises the lo-fi ethic he stands for. The album is far from lacking with emotion, the thumping, angry troubadour sound he inhabits initially eventually morphs into a balladeer's repertoire. 'Monotony' is as raw as they come, fraught with heart it consists solely of Beal at his most gentle, coupled with a few rudimentary chords. It is bare, yet poignant, more so it develops Beal's character as a balladeer as much as a hawker of what is essentially pirate music.

The recording is depleted of conformity; it is vintage and laden with negligible acoustics. What Beal does expertly here is craft an album that finds emotion and meaning in a mostly isolated recording. The maniacal laugh with which he ends the album on 'Angel Chorus' serves as a sinister indication of what is to come from the man, the darker elements will be pitch black, no one knows whether the lighter elements will exist at all. Beal will indubitably spend the rest of his career as an outsider, I doubt he'd want it any other way, and is unlikely to be invited onto the X Factor any time soon.