Everyone loves a good compilation, don't they? Step forward good old Dermot O'Leary with an easy listening double CD spectacular. It's the second offering from the award winning Saturday Sessions, which showcases new and established talent. There's a range of original material and covers all played in a laid back fashion, which makes it perfect for your aural pleasure. 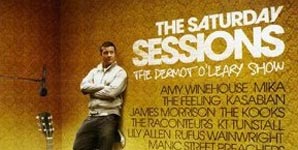 Mumford and Sons, The Cave, kicks things off on the first CD. It's a recognisable ditty full of angst but pretty all the same. Following this there's offers from Paolo Nutini and his Candy, Biffy Clyro surrendering their beard rock to cover Cheryl Cole's Fight For This Love and a heart rendering version of Dub Be Good To Me by the Ting Tings. I'm not one to praise Ellie Goulding especially as she's covering my karaoke favourite, Dolly Parton's 'Jolene', but she pulls it off well. It's such a likeable song, the listener will find themselves humming or singing along in no time. Ben's Brother cover of Poker Face, it's a beautiful rendition of a dirty song. Sat in amongst all these is Lily Allen's interpretation of Britney Spears' Womanizer; to some it's a selling point of the CD.

It's not all good though, in my humble opinion. Alesha Dixon almost murders Dusty Springfield's Son of a Preacher Man. Sometimes the classics should be left alone, which brings us onto the final song on CD 1, Scouting For Girls, annoying as they are manage to find an even more annoying song to murder, yep, Rockin' All Over the World. I'd suggest skipping this one and getting CD 2 on damn quick.

Elbow's bounding Ground For Divorce, brings about a heavier dingier start, it's lightened by the wonderful Paloma Faith's New York. So far we're in a world of love- ridden torment. Kasabian turn the volume up with an astonishing version of Empire. Three tracks in and we've established that we're in a world of torment on CD 2. It's the dark to the first offering's light. As it continues we've got Michael Jackson and Metallica covers amongst the Divine Comedy's rendition of MGMT's Time to Pretend, which is far better than the original. As the dark clouds begin to lift, a silver lining starts to slowly emerge. Scott Matthews, Elusive, is truly spectacular and Lisa Hannigan's version of Air's Playground Love is reworked beautifully. Cerys Matthews hold the penultimate track, that being Elvis' Love Me Tender, leaving Amy Winehouse to close with Rehab.

All in all, it's a sterling double album. There are some winners and a few that are lagging behind. It's not as mashed up as the BBC 1's Live Lounge offerings, but it's not supposed to be. It's one of those to just simply play, listen and enjoy.